Pink’s honors ‘The Great One’ 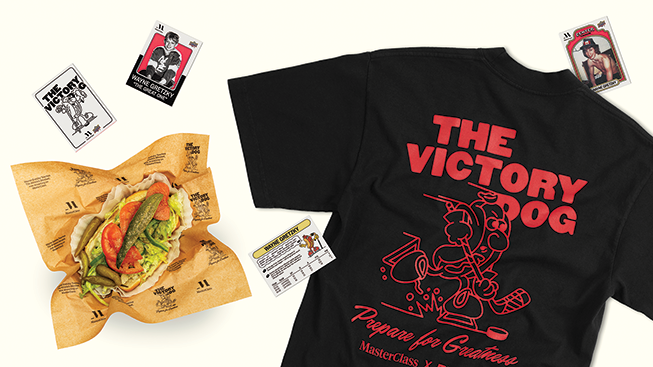 The Victory dog and a limited set of Upper Deck Gretzky cards come with each purchase. Limited T-shirts will also be available for purchase. (photo courtesy of MasterClass)

The Victory Dogs will be available from Thursday, May 13, through Saturday, May 15, and are priced at 99 cents, in tribute to Gretzky’s jersey number during his NHL career. They will be topped with mustard, onions, chopped tomato and three slices of bacon and piled high with pastrami. Sales will be limited to four Victory Dogs per customer. It’s a poorly kept secret that Gretzky’s favorite pre-game ritual was eating hot dogs – sometimes four at a time.

“Come with an appetite,” said Richard Pink, who operates the stand with his wife Gloria and sister Beverly Pink-Wolfe. “It’s going to be big.”

Pink’s Hot Dogs is partnering with MasterClass, a streaming platform allowing viewers to take online classes with celebrities, leaders and other professionals. The Victory Dogs coincide with the launch of a class with Gretzky on the mindset of an athlete on MasterClass.

Customers can also purchase Victory Dog T-shirts for $10.99. A mural of Gretzky, whose nickname is “The Great One,” will be available for photos at Pink’s.

“Wayne Gretzky was my idol,” Pink added. “The talent he had is something to always aspire to. His friendliness and the toughness was real. He is an iconic figure, just like Pink’s.”