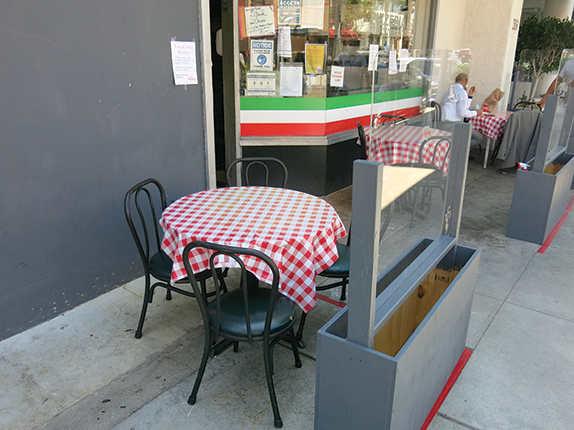 OpenBH allowed businesses like retailers and restaurants to operate on public rights-of-way during the height of the pandemic. (photo by Cameron Kiszla)

The Beverly Hills City Council on May 4 voted unanimously to extend the OpenBH program through the end of the year. The council also voted to review the program, which allows retail stores, salons, restaurants and other businesses to operate on public rights-of-way like sidewalks and in parking spaces, in September, when the council will consider making changes to the program, including potentially making it permanent. Los Angeles County recently qualified for the Yellow Tier, meaning bars can open indoors without serving food and museums, movie theaters and other venues can reopen at full capacity.

“We have all agreed that this is a very successful program,” Councilman Lester Friedman said. “It really has helped our business community get up and going again.”

“This has been a phenomenally successful program. We tried something and people love it,” Mayor Robert Wunderlich added.

A total of 114 businesses have received OpenBH permits, though the number of current participants is 96, as 18 salons have resumed indoor operations.

Due to the pandemic, the city has waived fees for the program, which utilizes special event permits, and city staff expected the city to forgo nearly $1.1 million in fees in 2021. In addition, parklets, which occupy parking spaces that would raise revenue for the city using parking meters, will cost the city nearly $301,000 in missed meter revenue this year, staff added. The council members, however, noted that these costs, as well as traffic control costs for installing the parklets and tents for outdoor dining, are “opportunity costs” that come with benefits, as Wunderlich said. Vice Mayor Lili Bosse agreed that the foregone fees benefit the city.

“Even though we are having a loss by the waiving of the fees, the balance is we’re having much more success, where restaurants are buzzing and they’re full,” Bosse said.

When OpenBH returns for consideration in September, the council members expressed support for considering some changes before the program would be made permanent. For instance, Councilman John Mirisch noted that when restaurants are able to return to 100% indoor capacity, the outdoor areas are essentially an expansion of the business, and the city might need to resume levying fees at that point. He also suggested that something could be done regarding the designs of the parklets so that they are more uniform in appearance, an idea that Friedman also discussed.

While the particulars are still to be determined, the council members encouraged interested businesses to apply for OpenBH permits, as they are loved by both the community and the businesses, Bosse said.

“We have now created something that we’ve been longing to do for many years, which was to create that sense of vibrancy and a buzz … This has really made Beverly Hills even more of a destination location,” Bosse said.

Councilman Julian Gold said the program is “on so many levels … better than we could have imagined” and supports OpenBH becoming a permanent part of Beverly Hills.

“Not only is it good for our restaurants and our business in this time frame, I expect as we recover from this, this wanting to be outside – look at where we live. Why wouldn’t you want to be outside?” Gold said.