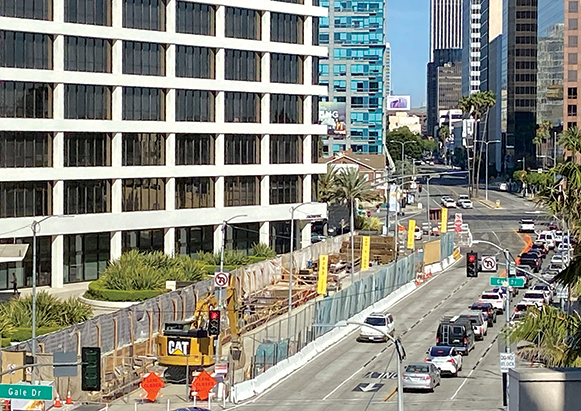 Metro held an online meeting on May 5 to provide information about the Purple Line Extension subway project. Construction is occurring at many locations along the route and Metro is advising about lane closures and other work that may have an impact on traffic and surrounding communities.

Near Wilshire/La Brea, station construction is anticipated to continue through mid-2022. Crews have begun construction of appendage structures, which are spaces that house vital station functions such as utility rooms and passageways. The work also includes exit and entrance construction.

Construction is anticipated to continue through 2022 at the Wilshire/Fairfax station. Appendage structures housing vital systems are also being built at the site. Orange Grove Avenue will remain closed south of Wilshire Boulevard through January 2022, and the sidewalk along the south side of Wilshire Boulevard between Ogden Drive and Orange Grove Avenue will be intermittently closed to support the work.

Other station appendage work is occurring along the southwest corner of Wilshire Boulevard and Fairfax Avenue. Wilshire Boulevard will be reduced to two lanes in each direction between San Diego Way and Spaulding Avenue through early August.

Farther west at Wilshire/Rodeo, construction is ongoing at a future subway station. Excavation is nearing completion and tunneling will continue near the station through 2022. Through at least June 30, only two lanes will be open in each direction on Wilshire Boulevard between Beverly and Crescent drives from 10:45 a.m. to midnight, and one lane in each direction will be open from midnight to 10:45 a.m. Near the end of May, K-rails along Wilshire Boulevard may be removed in the area, but the lane closures will remain in place.

Appointments no longer needed for vaccinations at L.A. sites