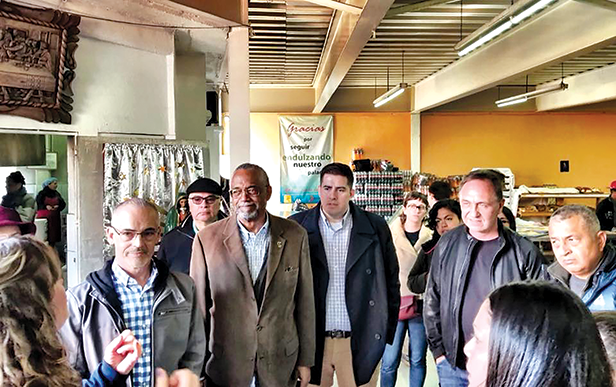 Los Angeles City Councilman Mitch O’Farrell, 13th District, is seeking to expand efforts to help unaccompanied minors who are refugees from Central American and other countries who have been recently arriving in greater numbers in the city.

Federal immigration authorities have been housing thousands of unaccompanied minors seeking asylum in facilities in Long Beach and Pomona. Some have family members or friends in Los Angeles, and the councilman is working with organizations to link them with supporters. Others have no family in the United States, and nonprofit organizations intervene with resources so the youth don’t become homeless or involved with gangs.

At the forefront of the effort is the Salvadoran American Leadership and Educational Fund, which coordinates services for immigrants including housing, meals, clothing, health care, job training and legal assistance. The need is critical, said Jocelyn Duarte, executive director of SALEF.

“The most important thing is to ensure they have what they need to survive,” Duarte said. “Some of them have family or friends that can help, but a lot of the time, the youth don’t have any family, and they become our youth.”

SALEF, based at 421 S. Bixel St. near downtown, frequently assists youth who are referred by others. Duarte said a 19-year-old girl from Honduras with a 3-year-old child recently sought help from SALEF after being homeless and staying in a park in South Los Angeles. She was referred by a youth who was previously helped by the organization. SALEF secured temporary housing for the woman and her child along with other resources and will continue to ensure their progress, Duarte said.

“We were able to find her space at one of the local shelters that accepts families,” she added. “That’s why a holistic approach is so important. We help them get into the county’s coordinate entry system, which puts them in the queue to receive a bed and other services.”

Duarte said most of the nonprofit’s clients are from Honduras, El Salvador and Guatemala. Many fled their home countries due to violence and economic disparity. Duarte said civil war, crime, gang violence and other factors have forced people to flee in large numbers. The trip across Mexico is also an arduous journey fraught with danger, she added, and once they reach the border, the minors often find themselves without support as they navigate the legal system seeking asylum. Under federal regulations, the unaccompanied minors have been transported to cities around the United States, with the goal of possibly unifying them with family or friends that can provide support during the process.

Duarte estimated there are approximately 2,500 youth under the age of 18 at the facility at Fairplex in Pomona and was unaware of how many were being housed in Long Beach.

O’Farrell said he saw the need for assistance for immigrants and unaccompanied minors when he and Councilman Curren Price, 9th District, traveled to Tijuana with SALEF in 2019. They met with members of other organizations helping immigrants at the border and learned the situation for many refugees is dire.

“We specifically visited some of these refugee camps where the unaccompanied minors had, in various caravans, arrived at the border. We saw firsthand how incredibly vulnerable these under 18-year-old unaccompanied minors were,” O’Farrell said. “Knowing that they were awaiting asylum cases, and knowing some of them ended up coming to Los Angeles, were brought here to wait for their asylum hearing without any safety net whatsoever … I wanted to make sure stateside, we could provide a safe environment.”

In 2019, O’Farrell introduced a motion to provide initial funding for a program assisting unaccompanied minors. The City Council approved $100,000 for SALEF, which started the project. In a motion introduced in early May of this year, O’Farrell called for a report from SALEF and other organizations assisting refugees, as well as the city’s Office of Immigrant Affairs, to determine best practices for helping people and what additional resources are available to further the effort.

“I wanted to bring them all in to explore how we could partner on ensuring their safety and security while they are waiting for these asylum hearings, and if they stay beyond, put them on a pathway to well-being,” O’Farrell added.

The councilman said he knows the assistance SALEF is providing is working. He said he saw it firsthand in the positive attitudes of some of the minors the organization previously helped when they volunteered at a recent food distribution at his field office in Echo Park.

“It was really gratifying to see them be to the point where they could come out, participate with my office and volunteer,” he added. “It was a really great turn of events.”

Duarte was grateful for the support of the councilman and remains optimistic that the city will provide more resources to help the minors. She added that the goal is to get to a point in which government and nonprofit partners can fully address the situation.

“We are very thankful to the city and elected officials like Councilman O’Farrell for their leadership,” Duarte said. “He understands our community very well.”