The strip mall at Wilshire Boulevard and Highland Avenue would be demolished to make way for the new mixed-use building. (photo courtesy of Google Street View)

A strip mall containing El Pollo Loco and Fatburger at the northwest corner of Wilshire Boulevard and Highland Avenue could soon be torn down to create room for a 242-unit mixed-use project.

“We’ve directed our architects to design a timeless building that will remain ahead of its time a decade into the future. The new residential community is being thoughtfully designed with both future residents and the surrounding community in mind,” Paperin said.

Because of the proximity to the Purple Line Station, the eight-story project is seeking approval under the Transit Oriented Communities Incentive Program, which encourages the building of affordable housing units near transit centers in exchange for incentives such as density increases and parking reductions. Of the project’s 242 units, 25 are expected to be affordable.

Pacific Springs, the “longtime owners of the property at the northwest corner of Wilshire and Highland” plan to include nearly 11,000 square feet of ground-floor commercial space in the 282,000-square-foot project, which Paperin said will “activate the pedestrian experience along Wilshire with community-serving retail.”

Paperin also highlighted the benefits for the complex’s residents, as the building’s design promotes “sustainability and healthful living,” with amenities like “ample outdoor space with 18,000 square feet of common space, as well as spacious balconies attached to most units; larger, more usable stair cores; built-in flexible office niches designed for in-unit work-from-home space; touchless controls and entries and new neighborhood gathering space with the expansion of the existing greenbelt by 50%.”

“Most importantly, we are committed to integrating this new residential community into the existing neighborhood, with visual connections into the development from Wilshire and the greenbelt,” Paperin added.

The greenbelt will add a half-acre of more open space to the neighborhood, which already includes the Mansfield Avenue Park between South Orange Drive and South Citrus Avenue. This new greenbelt, which will be paid for and maintained by the property owners but will be open to the public, will “expand the existing Orange-Mansfield-Citrus greenbelt by 50% in length,” Paperin added.

“We had a lot of preliminary questions. It was the start of the conversation,” he said. “We’re very grateful that they came to us with their plans for our input, and I know the board members look forward to continuing the conversation.” 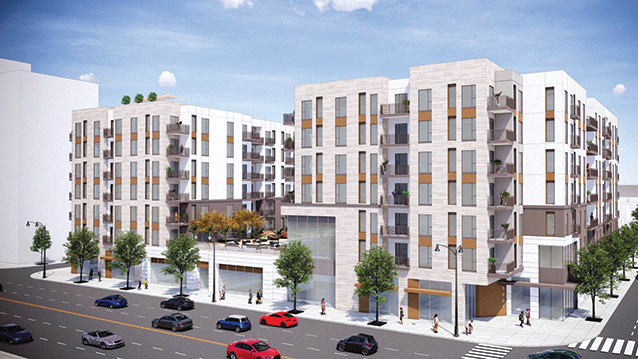 Cindy Chvatal-Keane, president of the Hancock Park HOA, said her group also had a “productive conversation” with the project team, which also agreed to meet with the four neighborhood groups at one time for more discussions.

“Everyone is looking forward to being able to have that collective conversation,” Chvatal-Keane said. “I think it’s really important because of what’s going on in terms of development … To have a developer willing to sit and work with the neighborhoods is a good thing.”

Chvatal-Keane also expressed support for the project’s planned greenbelt. More questions need to be addressed – including design elements, height and privacy concerns – but the green space would be “a benefit for the entire area,” Chvatal-Keane said.

“I think anytime we can add green space to our community, it’s very important,” she said. “This is a very big piece of their project. It’s street to street, Highland to Citrus, and it’s 75 feet deep. That’s a big space.”

Chvatal-Keane said the project team will meet with the four neighborhood groups likely “in the next month or so,” after which it will be considered by the GWNC. Starr said the GWNC meeting has not yet been scheduled.