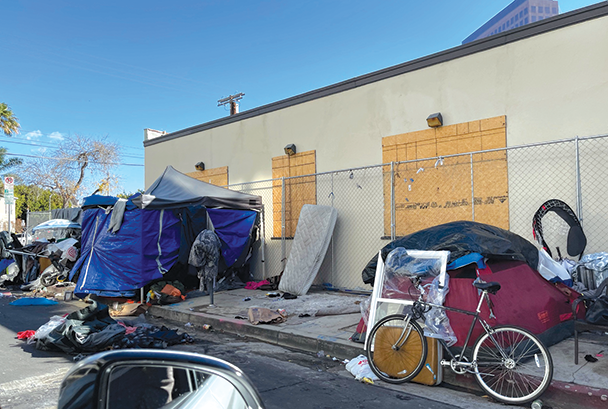 The city of Los Angeles found housing for residents of a former homeless encampment on San Vicente Boulevard, which has now been removed. (photo courtesy of Peter Oh)

The Midtown Los Angeles Homeless Coalition and the Mid City West Community Council recently released the results of a count of unhoused individuals held on March 31 in the Fairfax, Beverly Grove, Miracle Mile and Wilshire communities.

The coalition and community council partnered this year to conduct a count of unhoused individuals in the local area after the Los Angeles Homeless Services Authority canceled its annual countywide count in January because of the COVID-19 pandemic. Organizers said it was important to hold a count because the numbers will give the public a better understanding of the problem and guide the distribution of future resources to address homelessness in the community.

“It went very well,” said Lauren Nichols, chair of the Mid City West Community Council. “It was very positive that we were able to come together. I think we all realize that homelessness is at a crisis level throughout the city. It felt wonderful to be involved and part of the solution.”

The count was conducted by approximately 65 volunteers who canvassed the neighborhoods in cars, counting individuals, tents and people believed to be staying in vehicles. Hackman Capital Partners, the owner of Television City, allowed the organizers to use a parking lot as a staging area for the count.

The volunteers counted 277 individuals experiencing homelessness, compared to 260 the prior year. The slight increase was within the statistical margin of error for the count, organizers said, and they concluded that the numbers stayed roughly the same in 2021 as 2020.

Arnali Ray, a member of both the Midtown Los Angeles Homeless Coalition and the Mid City West Community Council, said the data revealed some interesting dynamics occurring with homelessness in the community. The number of people staying or sleeping exposed on the streets declined, but more tents popped up. She said volunteers counted approximately 25 to 30 tents throughout the area.

“The amount of tents dramatically increased,” Ray said. “A lot of organizations have been distributing tents and that was COVID-related. The idea was for people to self-isolate. We saw a significant bump in the number of tents.”

The pandemic may have driven other factors affecting the number of people living exposed on the streets, Ray added. Emergency shelters opened, including a shelter in Pan Pacific Park, and more resources became available through programs such as Project Roomkey.

For those who are still sleeping outright on the streets, however, the pandemic worsened their quality of life, organizers added. While public buildings were closed, fewer places were available for people to use restrooms or access basic necessities. Those counting reported that the conditions in which people are living outright on the street appeared to have become significantly worse.

The Mid City West count occurred approximately one month after a count in Hollywood conducted by the organization Hollywood 4WRD. Louis Abramson, a Hollywood 4WRD member, helped guide the Midtown Los Angeles Homeless Coalition and the Mid City West organizers with their count. As was the case in Hollywood, researchers from UCLA and USC analyzed the numbers for accuracy before they were released.

“I think it’s fantastic they did a count,” Abramson said. “What’s interesting is they saw a 20% decrease in the number of rough sleepers (people outright living on the streets), but they saw the number of tents almost double, which is something we did not see.”

Abramson added that another community council in Eagle Rock recently conducted its own count, and an additional count may occur soon in Silver Lake. He said the more data that is obtained, the easier it will be to administer services and resources. The information from the Hollywood and Mid City West counts has been shared with city officials to help guide policy in addressing homelessness. The Mid City West Community Council includes neighborhoods in the 4th and 5th Los Angeles City Council districts.

“The Mid City West Homeless Count results are sobering: the number of individuals experiencing homelessness in this neighborhood stayed largely the same between 2020 and 2021,” said Councilwoman Nithya Raman, 4th District, in a statement. “While I am heartened by the fact that we did not see an increase over this last difficult year, it is clear that we need much more focused work in this neighborhood. We need to build on what we know works to get people into housing. Targeted encampment-to-home strategies, focused outreach and robust service offerings can and will move the needle in a positive direction, and that is exactly what our office is pushing for.”

Councilman Paul Koretz, 5th District, added it was important to conduct a count in the local area.

“The Mid City West Community Council homeless count provides us with important information in the absence of the official LAHSA homeless count this year. We learned that the homeless population in their neighborhood didn’t grow as much as we thought, considering the proliferation of tents in the last year,” Koretz said in a statement. “We’ve learned that number is rooted in agencies and advocacy groups providing tents to the unhoused to help curb the spread of COVID, not in some major explosion of newly unhoused individuals. This effort, and others like it elsewhere in my district, remind us that solving the problem of homelessness needs to involve the whole community working collectively and constructively. I’m grateful to them for undertaking it.”