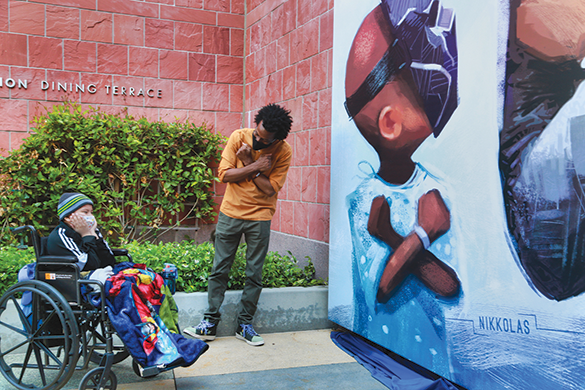 Artist Nikkolas Smith donated his much-beloved mural “King Chad” to Children’s Hospital Los Angeles. The rendering, which was previously on display at Downtown Disney in Anaheim, was unveiled at its new and permanent location at the Sunset Boulevard hospital on Tuesday, April 27.

CHLA Cancer patient Daniel, 11, and his family joined Smith for the unveiling. A big “Avengers” and “Black Panther fan,” Daniel was in awe of the mural.

“Seeing Daniel’s reaction when it was unveiled, to see his eyes light up, was unbelievable,” said Smith, a former Disney Imagineer. “In one second you can put that joy, that hope, that inspiration in other people. It’s beautiful and it inspires me to keep making more art.”

The mural pays tribute to late actor Chadwick Boseman, who played T’Challa, in the revered 2018 Disney film “Black Panther.” The image was inspired by a visit Boseman paid to pediatric cancer patients that same year.

Boseman was an accomplished and respected actor well before “Black Panther” catapulted him to international stardom. The Academy Award nominee was well-known for his integrity and his compassion, especially in his work with children who have cancer.

‘The Mitchells’ imagines our iPhones fighting back to hilarious effect