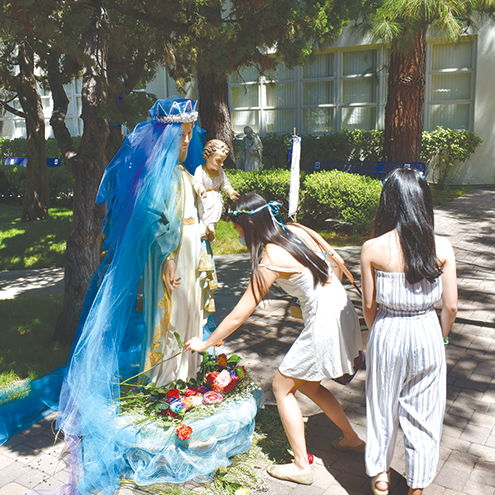 Nearly 400 Immaculate Heart students joined faculty and staff on campus on April 30 for the 100th celebration of Mary’s Day, a cherished school tradition that honors Mary, the mother of Jesus and the school’s patroness, as well as all women.

Mary’s Day started in 1921 when Bishop John Cantwell blessed a statue of Mary donated to Immaculate Heart in honor of the school’s founders, the Sisters of the Immaculate Heart of Mary, and the 50th anniversary of their arrival in California. After the blessing, a student crowned the statue with a floral wreath, and the day was commemorated with a play and picnics organized by students.

In the years since, Mary’s Day has taken many forms, but by tradition it has always combined religious observance with joyful festivities. This year’s centennial edition was no different.

For the 100th Mary’s Day, the school chose the theme “under the mantle of Mary” in recognition that the entire Immaculate Heart school community remains united by love although the pandemic still keeps many separated. The day began with a livestreamed mass by Homeboy Industries founder the Rev. Greg Boyle, who recalled his mother and five sisters, all IHHS alumnae, celebrating Mary’s Day. He urged students to accept the theme’s call and be the “mantle” for each other by carrying, sustaining and holding each other. To close the mass, student body president Cleo Riley crowned a statue of Mary outside the school chapel.

Immaculate Heart High School students, joined for the first time by Immaculate Heart Middle School students, came to campus in small groups to take part in the events. The groups traveled through 13 stations around campus, participating in adapted versions of classic Mary’s Day traditions like making head wreaths and performing the Great Lawn Dance. Some activities were created especially for the 100th anniversary celebration, including writing notes for a time capsule commemorating the year.

The day also included a guided meditation and taped performances by the Genesians drama club. Along the way, students decorated the campus with chalk art, colored pieces of a large mosaic image of Immaculate Heart, wrote letters of encouragement to children at St. Jude’s Hospital and placed roses representing themselves under the crowned statue of Mary and her mantle.