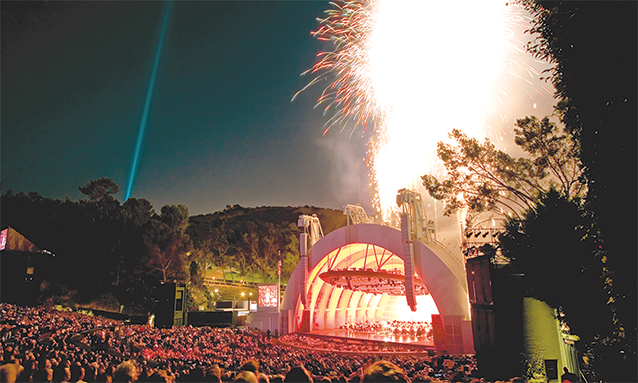 The Hollywood Bowl will reopen to the public with the “July 4 Fireworks Spectacular,” featuring Kool & the Gang and the Hollywood Bowl Orchestra, on July 3 and 4. (photo by Fred George/courtesy of the LA Phil)

The Los Angeles Philharmonic Association has announced its 2021 summer season at the Hollywood Bowl, marking its return following the cancellation of the 2020 summer season.

Following public health and reopening guidelines, the LA Phil will offer more than 50 performances, including 14 concerts with Music and Artistic Director Gustavo Dudamel. From classical music to pop, reggae, jazz and film, the season showcases acclaimed artists and includes the return of numerous Hollywood Bowl favorites.

“Music-making is ultimately about the shared experience of people coming together and being united in a communion of sound. For musicians, there is no greater joy than feeling our instruments resonate in harmony with those around, and that is why this return to in-person performances at the Hollywood Bowl is such a powerfully important moment,” Dudamel said. “After the many challenges of this past year, we all feel a profound sense of joy and gratitude to be able to once again share music and especially to be able to offer opening concerts to our heroes on the front lines, who have given their all to keep us safe this past year.”

In advance of the upcoming season, the LA Phil will host free concerts and programs for health care workers, first responders and essential workers on May 17 and 22, and June 12 and 26. The Hollywood Bowl will reopen to the public with the “July 4 Fireworks Spectacular,” featuring Kool & the Gang and the Hollywood Bowl Orchestra on July 3 and 4. Dudamel will conduct the LA Phil in a performance of Prokofiev’s “Peter and the Wolf,” with Viola Davis narrating, on July 15. Christina Aguilera is scheduled to perform on July 16-17. Actress, singer and songwriter Cynthia Erivo makes her LA Phil debut with Wilkins on July 30.

Other highlights include the “Tchaikovsky Spectacular” with fireworks on Aug. 6-7; Dudamel conducting the LA Phil in an all-Gershwin concert with pianist Jean-Yves Thibaudet and countertenor John Holiday on Aug. 10; H.E.R. with Dudamel and the LA Phil on Aug. 13-14; cellist Sheku Kanneh-Mason performing Grieg’s “Peer Gynt Suite No. 1” on Aug. 17; and the “Sing-A-Long Sound of Music” with host Melissa Peterman on Aug. 21. Additionally, Carlos Vives joins Dudamel and the LA Phil on Aug. 27-28.

In September, the music of film will be explored with the “Maestro of the Movies” John Williams from Sept 3-5. An all-Mozart program featuring LA Phil principal concertmaster Martin Chalifour and principal viola Teng Li will be held on Sept.28.

The Hollywood Bowl’s season also includes the return of the Jazz Plus series, KCRW’s World Festival and a series of guest conductors leading the LA Phil.