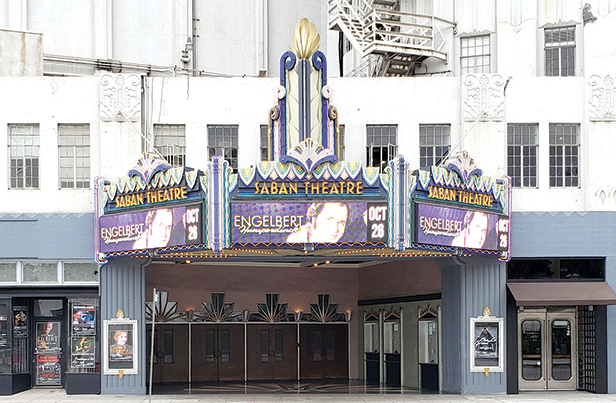 The Saban Theatre building includes the theater space and an office tower. (photo by Cameron Kiszla)

The temple is suing the Los Angeles County Metropolitan Transportation Authority and the city of Beverly Hills over the construction work, which the temple claims has caused damage to the theater at 8440 Wilshire Blvd. and limited access to the venue for pre-pandemic concerts and events.

The first phase of the trial began earlier this month. If California Superior Court Judge Steve Goorvitch agrees that the Saban Theatre, which is overseen by the Temple of the Arts and provides revenue for the temple’s operations, is entitled to damages, then the trial will move to a second phase, to be decided by a jury.

Edward Lear, an attorney with Century Law Group who is representing the Temple of the Arts, said the temple only needs to prove that the damage to the building and lack of access was “substantially” caused by the excavation work on nearby Wilshire Boulevard.

“[The defendants are] going to argue that the damage, if any, is cosmetic and minor, and even to the extent that there was cosmetic and minor damage, that it was not caused by the settlement of the soil, but from some other factor, including the 1994 Northridge earthquake,” Lear said.

Lear added “we don’t agree with that,” and he believes a 2015 survey commissioned by Metro will show that the damage is new and caused by the excavation work.

“We have to prove any damage was substantially caused by the excavation. We believe that we’ve proved damages to the structural integrity of the [theater] building, but we don’t have to even go that far,” Lear said.

Beverly Hills spokesman Keith Sterling said the city is being defended and indemnified by Metro and deferred comment to the transit agency, whose spokesman, Dave Sotero, said that “Metro does not comment on pending litigation.”

Rabbi David Baron of the Temple of the Arts noted that they’ve seen “a number of vertical cracks that are new and recent, and we’ve had falling plaster.”

“The trial is ongoing, and we’re staying cautiously optimistic that the court understands the scope of the damage we’ve sustained here at the Saban Theatre and that we continue to sustain and how it was substantially caused by the excavation in front of our building,” Baron said.

Lear, who is also representing the Flats Restaurant in their lawsuit that alleges that they went out of business due to the Purple Line Extension construction, said he expects the defense to conclude its arguments this week, with more oral arguments likely scheduled for July or August. Lear declined to state how much the temple is seeking in damages, describing it as “an amount not yet determined, not yet presented to the court.”

“Best case is that they will be fully compensated for their losses,” Lear said.

Baron also hopes to be compensated enough to restore the theater to its pre-construction state, and said he was surprised more had not been done to protect the Saban Theatre, a national, state and local historic landmark.

Baron added that the Temple of the Arts and theater are in favor of the subway, which is “a great benefit to any community.”

“It’s important to understand that our Temple of the Arts and Saban Theatre as stakeholders welcome the subway,” he said. “We just didn’t want to be destroyed in the process.”