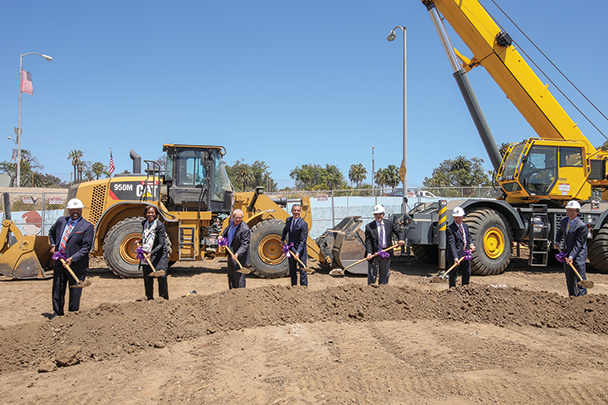 Mayor Eric Garcetti, center, led federal and local officials on May 24 in turning the first shovels of dirt for the final segment of the Purple Line Extension project. (photo courtesy of Mayor Eric Garcetti’s office)

Federal, county and local officials broke ground on May 24 on the third and final section of the Purple Line Extension project.

The last 2.5-mile segment will run between the Century City/Constellation station and the Westwood/VA Hospital station. It is expected to open in 2027 and will include an additional station – Westwood/UCLA.

The entire Purple Line Extension, which will run 8.9 miles between Wilshire/Western and Westwood, is a critical piece of infrastructure in the plan to bring rail service to all sections of Los Angeles, the officials said. Construction on the route under Wilshire Boulevard has been ongoing for the past decade. The first phase of the project between Wilshire/Western and Wilshire/La Cienega is expected to open in 2023 and will include stations at Wilshire/La Brea and Wilshire/Fairfax. The second section from Wilshire/La Cienega to Century City/Constellation is anticipated to be operational in 2025 and includes the Wilshire/Rodeo station in Beverly Hills.

When completed, the Purple Line will offer 25-minute commutes between downtown and the westside, officials said. It will also ease traffic congestion and offer new access to areas such as the Miracle Mile and Beverly Hills. A northern extension of the Crenshaw Line that would connect with the Purple Line before heading through West Hollywood and into Hollywood is also under consideration.

“The Purple Line Expansion is the key that will unlock our transportation future and burst open doors of opportunity on the westside. [This] groundbreaking moves us one step closer to completely redefining our city’s relationship with public transit,” said Los Angeles Mayor Garcetti, who also serves as chairman of the Metro Board of Directors. “We promised Angelenos a world-class transit system when we passed Measure M, and this milestone is a clear indication of our commitment to make Los Angeles a more accessible, sustainable and inclusive city.”

The groundbreaking for the third segment of the subway line was held on the grounds of the West Los Angeles Veterans Affairs Medical Center, just west of the San Diego (405) Freeway. Crews will be driving steel piles into the ground to create a perimeter around the future subway station. The area will then be excavated before station construction begins.

The final segment is being partially funded by a $1.3 billion federal grant from the U.S. Department of Transportation through a Federal Transit Administration Capital Investment Grant program referred to as New Starts. More than $2 billion in additional funding will come from half-cent sales tax increases in measures R and M, approved by voters in 2008 and 2016, respectively.

Outgoing Metro CEO Phillip A. Washington said the Purple Line will be transformational for the region. He also expressed gratitude to partners in the effort to build the subway project.

“I want to thank U.S. Sen. Dianne Feinstein for championing this project as a key member of the Senate Committee on Appropriations,” Washington added. “I also want to express my appreciation to Federal Transit Administration Deputy Administrator Nuria Fernandez, Vice President Kamala Harris, Congresswoman Karen Bass, Congressman Ted Lieu and all members of the Los Angeles County Congressional Delegation for uniting behind this project and ensuring that federal funding would be prioritized for this important project. It is truly a project of regional and national significance.”

The Purple Line Extension is projected to have approximately 49,300 daily weekday boardings at the seven new stations, adding 78,000 new daily trips to the Metro Rail system.