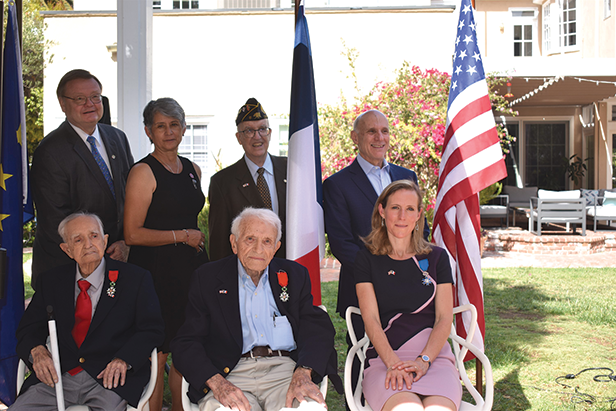 The French Consulate in Beverly Hills on May 20 awarded the French Legion of Honor to two U.S. Army veterans who served in World War II, 1st Lt. Fernando Torres and Pfc. Oscar Stein.

French Consul General in Los Angeles Julie Duhaut-Bedos presented the Legion of Honor, France’s highest award, to the two veterans in recognition of their service in France in World War II.

Torres, 98, was born in Monterrey, Mexico in 1922. He landed on Omaha Beach on June 7, 1944, with Company A of the 17th Signal Operations Battalion. His significant decorations include the EAME Campaign Medal with five battle stars, the World War II Victory Medal and the Good Conduct Medal. Torres and his wife, Gail, live in West Covina.

Stein, 97, was born in Dynow, Poland, in 1923, but his family moved to Vienna, Austria, when he was a week old. He landed on Omaha Beach on June 10, 1944, assigned to the 3rd Battalion, 18th Infantry Regiment of the 1st Infantry Division. His significant decorations include the Bronze Star Medal, the EAME Campaign Medal with five battle stars, the Combat Infantryman Badge and the French Fourragere. Stein and his wife, Marya, reside in Sherman Oaks.

The French Consulate is located at 813 N. Camden Drive.

Feinstein, Padilla introduce bill to protect Rim of the Valley