Feinstein, Padilla introduce bill to protect Rim of the Valley 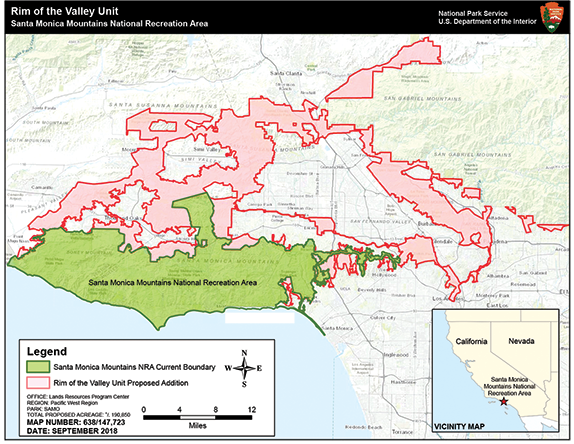 The Rim of the Valley Corridor Preservation Act would protect trails and open spaces in the Los Angeles area. (map courtesy of the National Park Service)

Companion legislation introduced by U.S. Rep. Adam Schiff (D-Burbank) was passed by the House of Representatives in February.

“Southern Californians deserve access to more natural places,” Feinstein said. “Los Angeles County is one of the most park-poor counties in the state. Our bill would help fix that by protecting portions of the Rim of the Valley Corridor, connecting more people to the trails and vast open spaces in the foothills of the surrounding mountains. It would boost the local economy, protect sensitive habitat for wildlife and allow more people to experience the unspoiled beauty of the region.”

“The science is clear: to solve the climate crisis, we must protect our natural spaces,” Padilla added. “Conserving the Rim of the Valley Corridor is critical to helping California and the nation meet our goal of conserving 30% of our lands and waters by 2030. I’m proud to join Senator Feinstein in introducing the Rim of the Valley Corridor Preservation Act to help protect this area’s natural resources and diverse wildlife. Not only will this bill help us meet our climate-change goals, it will also improve access to the outdoors for some of the most park-poor communities in the country.”

“The Rim of the Valley is the critical bridge between our urban city centers, suburbs in the Los Angeles basin and the spectacular wilderness that surrounds us,” Schiff said. “I am thrilled to work with Senator Feinstein in getting this piece of legislation passed so we can protect these lands for generations to come. Millions of residents in the Los Angeles region depend on open space in our communities, and the benefits of widely accessible green space have never been more apparent than during the past year. The Rim of the Valley Corridor is an area of breathtaking natural beauty, and we must preserve this pristine land for the sake of our environment, wildlife and ecosystems, and for the benefit of L.A. residents, the millions each year who visit and for generations to come.”

The proposed expansion is based on a six-year study of the region completed by the National Park Service in 2015. It would allow NPS and the local community to work together to better protect natural resources and habitat in the corridor and improve access for recreational and educational purposes.