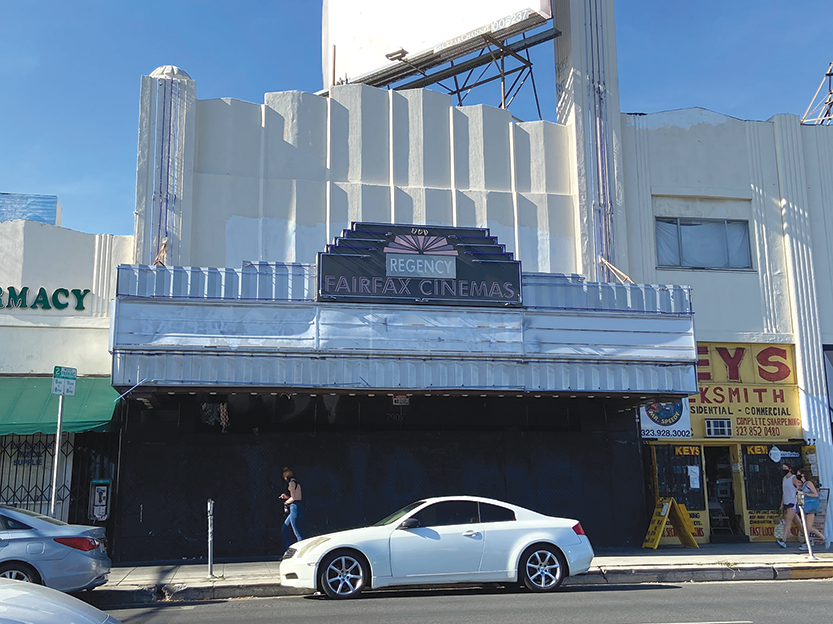 The marquee and façade of the long-vacant Fairfax Theater are required to be kept intact if the building is redeveloped. (photo by Edwin Folven)

Updated at 1:30 p.m. on May 6: The Los Angeles Cultural Heritage Commission voted unanimously on May 6 to further study the application for historic-cultural monument designation for the Fairfax Theater. It will be considered at a future meeting.

Newly unearthed history about the Fairfax Theatre’s ties to the Jewish community could be the evidence needed to declare it a historic-cultural monument.

The Los Angeles Cultural Heritage Commission will consider an application to nominate the theater for historic status today, May 6, at 10 a.m. Commissioners are expected to receive input at a virtual meeting and decide if the designation process will continue. To view and participate in public comment at the meeting, visit planning-lacity-org.zoom.us/j/86905065404#success, and use the meeting ID: 86905065404, and the passcode: 537536.

The effort to obtain historic-cultural status for the former theater building is somewhat symbolic, supporters of the application acknowledged. The building owner has city approval to build 71 condominiums at the site and those plans cannot be changed by historic designation. The approvals also already require the theater’s marquee, Art Deco façade and tower to remain intact when the new project is built.

Save Beverly Fairfax and the Art Deco Society of Los Angeles want the city to go on record identifying the theater’s importance to the community by designating the property as a cultural-historic monument. Ultimately, it may also lead to a plaque or marker being placed at the site designating the building’s significance, although that has not been determined, supporters said.

A previous effort in 2010 to get the building designated as a historic-cultural monument failed after the Cultural Heritage Commission decided the theater’s interior had been altered significantly and there was not enough evidence to show it was a significant part of the local community’s history. With the new application, the commission will consider whether there is enough evidence to reevaluate the site as historic, and if so, it will go through further hearings. The Los Angeles City Council makes the final determination on cultural-historic status.

Steven Luftman, a member of the grassroots group Save Beverly Fairfax and board member for the Art Deco Society of Los Angeles, filed the new petition for monument status after completing research on the Fairfax Theater. Luftman said the new information he uncovered shows the building and theater were an important part of the history of the local Jewish community.

“I think the new evidence is overwhelming,” Luftman said. “My hope is they will give it further consideration and they make it a monument.”

The Fairfax Theater opened in March 1930, becoming the first movie theater in the neighborhood. It predated the first synagogues in the Fairfax District, which were established in 1933, according to the application. The theater served as the site of fundraisers for new temples and other organizations, as well as the Beverly-Fairfax Jewish Community Center, which opened in 1943. Many High Holy Days services were held at the theater during the early days, supporters said.

The building also housed the first Jewish deli in the neighborhood, Luftman added, as well as the first office of a Jewish doctor. His research determined that Dr. Benno Z. Reinard opened an office in the building in 1936. Reinard, an obstetrician from Berlin, fled Nazi persecution and settled in the Fairfax District, Luftman added.

“The inner stories are incredible,” he said. “It really was an incubator for the Jewish community.”

Luftman said he found much of the information in the B’nai B’rith Messenger, a publication that chronicled Jewish life in Los Angeles from the 1890s to the 1990s. Archives have recently been made available online.

Margot Gerber, president of the Art Deco Society of Los Angeles, said there is no question the Fairfax Theatre should be further recognized as historic. The organization is holding a “Photo Safari” exploring the Beverly-Fairfax area from 10:30 a.m. to 12:30 p.m. on May 8, and the former theater will be the central focus, she said. Photographers can sign up on the Art Deco Society’s website.

“There is a lot of interest in potentially trying to revitalize this as a theater,” Gerber said. “It’s a shame it has been left to languish.”

Luftman said many other organizations have sent letters of support, including the Jewish women’s organization Hadassah and Holocaust Museum Los Angeles.

“This building is a major part of the history of the earliest movement of the Jewish community westward from areas like Boyle Heights in the late 1920s and early 1930s,” read a letter sent in support of the nomination from Lisa Barnet, director of operations for Holocaust Museum L.A. “The Fairfax District was home to a diverse Jewish population including many Holocaust survivors, and remains a vibrant Jewish enclave to this day. With its close proximity to our museum and the newly established Beverly Fairfax Historic District, the Fairfax Theater helps to tell the story of the Jewish community.”

“This striking example of Art Deco architecture marks the southern entrance into the Fairfax commercial corridor. When it opened in 1930, it was by far the most significant building in the Beverly-Fairfax neighborhood,” read a letter from Michelle Conwisar, president of Hadassah Southern California. “The Fairfax Theater became the center of the developing neighborhood’s social life, both as a venue for entertainment and as a center for fundraising by local Jewish synagogues, temples, clubs and charities.”

The building’s owner, B&F Associates, opposes the historic-cultural monument nomination. Attorney William F. Delvac, who represents the owners, declined to go on record but outlined their position in a letter to the Cultural Heritage Commission. It offers multiple reasons why the process for nomination should not go forward, including the fact that it was previously turned down, the city has already approved a housing project at the site and the building owner will preserve the theater’s marquee and key Art Deco features. Further hearings will also waste the city’s time and resources, he said.

“Of special importance is the condition of approval that requires retention of the façade,” Delvac said in his letter to the commission. “This makes it clear that the remainder of the building is not required to be preserved.”

Luftman acknowledged that it will be challenging to obtain historic-cultural monument status but it was important to try.

“I want to make sure it is recognized in history. The Fairfax District was so special when I was growing up and many of the places are disappearing,” Luftman added. “Preserving the façade is better than nothing, but I think it is very important that the history is preserved.”