John Cena appears in “F9,” the ninth chapter in the “Fast and Furious” franchise. (photo courtesy of Universal Pictures)

The latest guidance from the Centers for Disease Control and Prevention – confusing as it is regarding implications at state levels – seems to cement the return of a pre-COVID tradition: blockbuster tent poles. Most of those grand and ridiculous summer films chose hibernation in lieu of a steaming debut.

The offerings are lighter than past years, and plenty are now opting for variations like simultaneous streaming and theatrical releases. But their return, as Thanos would say, is inevitable. Of all the summer films, 11 feel like a throwback to cinema before isolation. They might just be the kind of rides worth experiencing on the biggest screen possible (if that can be done safely).

“A Quiet Place Part II” (May 28)
The sequel to the previous John Krasinski-directed smash horror hit was one of the first casualties of 2020’s major films. This one might not live up to its incredible, and quite unexpected, predecessor, but it will at least continue a glorious dive into a marvelous dystopian universe.

“Cruella” (May 28)
A prequel story about Cruella de Vil (starring Emma Stone here) from “One Hundred and One Dalmatians” that rocks all degrees of “Joker” vibes – that’s certainly a mood. Based solely on the trailers, it promises a dramatic, colorful foray into villainy. But the idea of Disney letting a film like this be what it should seems highly unlikely.

“The Conjuring: The Devil Made Me Do It” (June 4)
The first “Conjuring” is a master class in horror, well-paced and quite scary. The same cannot be said about its direct sequel or other spinoffs. Only the devil knows if this one will scare this series back in line.

“F9” (June 25)
While other film studios kept pushing back and pushing back, hoping businesses would re-open, Universal Pictures canceled much of its major film slate. The ninth chapter in the “Fast and Furious” franchise will finally arrive with John Cena as a villain and at least two of the “Fast” fam momentarily drifting into space … yes, space. That’s the kind of bold, outlandish ride that is no longer on hold.

“Black Widow” (July 9)
Marvel always dominates that first week of May. Frankly, no other studio dares compete against the Earth’s mightiest heroes. But May 2020 marked the first time in over a decade a new entry did not grace the big screen. And that trend continues, as Scarlett Johansson‘s first, and possibly only, feature in the franchise moves to a July date. Espionage, a new villain, a legacy character and plenty of hand-to-hand combat are sure to keep Marvel Studio’s streak alive.

“Space Jam: A New Legacy” (July 16)
LeBron James replaces Michael Jordan in a long-awaited sequel to the cult classic. But the return of “Space Jam” also seems like one big self-congratulation, as Warner Bros. decides to include a host of cameos from its massive pop culture library. King Kong, the Iron Giant, DC characters and even some agents from “The Matrix” are set to appear. Who knows, it might succeed where “Ready Player One” failed.

“Snake Eyes: G.I. Joes Origins” (July 23)
G.I. Joe’s two previous attempts on the big screen haven’t fared well, so looking to hope for this one feels hollow. That said, an origin story about the property’s most elusive protagonist might just be a sleeper hit, or a needed excuse to enjoy a whole lotta samurai sword fights.

“Jungle Cruise” (July 30)
Another Disney adventure story based on a ride. This time, Dwayne Johnson and Emily Blunt take the lead. It certainly checks off the charming leaves portion of a potential blockbuster but may we never forget how south all those “Pirates of the Caribbean” films went. They’re quite the cautionary tale.

“The Green Knight” (July 30)
A24 is always the studio to watch, constantly pumping out incredible modest-budget projects. And perhaps this one can finally bring an Arthurian story to the big screen that’s memorable. Several decades have passed since the last and probably only real winners in this fantasy subgenre. 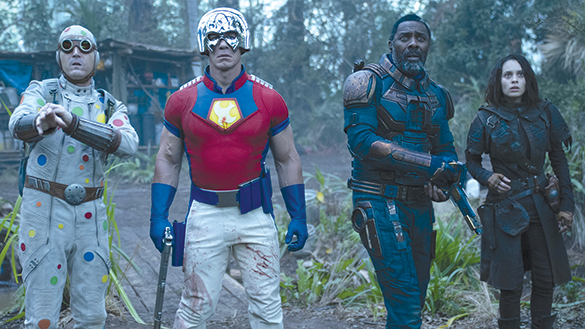 “The Suicide Squad” (Aug. 6)
When Marvel’s overlord Disney decided to let director James Gunn go following a series of unearthed tweets – ones the media conglomerate certainly knew about but only concerned itself with following some bad press – from a decade ago, Warner Bros. decided to take advantage. While Gunn also is back on board with a third “Guardians of the Galaxy,” he spent the interim concocting a kinda sorta but not really sequel to 2016’s abysmal “Suicide Squad.” With an R rating, carte blanche to kill whoever he wants and some promising marketing to this point, this supervillain “Dirty Dozen” flick might help the summer movie season wind down just right.

“Candyman” (Aug. 27)
A remake of a horror classic produced by Jordan Peele starring “Watchmen’s” Yahya Abdul-Mateen II – yes, yes and yes. Late August is always hot, so this one seems like the best excuse to stay inside – and then run away in fear.