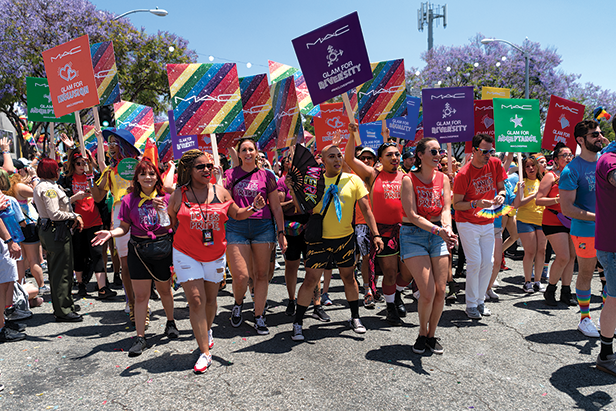 Pride Month is nearly here, Christopher Street West, the nonprofit that puts on LA Pride, announced a mostly virtual celebration for this year.

On June 10, the organization will host a concert by Charli XCX and up-and-coming LGBT artists, and on June 12, ABC7 will broadcast the “Thrive with Pride Celebration,” featuring special guests, performances and honorees.

Gerald Garth, treasurer of the CSW Board of Directors, said in an email that despite the pandemic – “one of the most impacting years of our generation” – CSW wanted to hold virtual celebrations. “Pride has always been a time to showcase resiliency, strength and action; this year, CSW thought it was particularly important to celebrate Pride to highlight just that,” he said.

“We definitely recognize that around the world folks have consumed more screen time than ever before,” Garth said. “But our community’s safety is our top priority. While we’re excited to see public health data shift positively, we recognize that many sub-communities within the LGBTQ+ community are disproportionately impacted by COVID-19. We count it a responsibility to provide safe, yet exciting options and access across the spectrum. Because of that, our team has crafted multiple ways to show their Pride.”

The potential for in-person events has not been ruled out, and CSW is “working down to the wire” on both digital and potential live events, Garth said.

“As we are continuing to watch local COVID data, we are also activating and announcing responsible programming across Los Angeles County to create safe, accessible and diverse in-person experiences,” Garth said.

CSW is pairing its Pride celebration with philanthropic efforts, including a partnership with Big Sunday. Angelenos will be able to volunteer in person or donate goods and funds to local organizations as part of an initiative known as Pride Makes a Difference.

“Pride Makes a Difference in partnership with Big Sunday gives the community changes to connect and celebrate where they are and around issues that are most important to them throughout the entire month of June,” Garth said.

In CSW’s statement, Los Angeles City Councilman Mitch O’Farrell, 13th District, said he was “so pleased that this year’s Pride festivities embrace the spirit of the first Pride parade and our activist roots.

“By bringing together LGBTQ+ communities from every corner of our city, we will uplift all voices and elevate the important work of the icons of the LGBTQ movement who sacrificed everything in their young lives at the time so we can all celebrate together in 2021,” O’Farrell said. “With a mix of virtual and potential in-person events, this year’s festivities will keep our community safe and connected while providing every Angeleno an opportunity to embrace giving and volunteerism.”

CSW, which announced last year that it was removing LA Pride from West Hollywood, has not yet announced where Pride 2022 will be held.

“We’re working on it and engaging partners and collaborators in expansive and innovative ways,” Garth said. “We will continue to celebrate, but while growing the footprint and expression of what Pride means.”

Lisa Marie Belsanti, West Hollywood’s director of communications, said “the more Pride, the better” for West Hollywood and the Los Angeles region. West Hollywood has announced its own Pride celebration, with the city partnering with the West Hollywood Chamber of Commerce to help local businesses host their own in-person events. City-sponsored events will be held virtually.

“West Hollywood has a wide array of programming around Pride,” Belsanti said. “The thing about West Hollywood is 24/7, 365, Pride happens here, but during Pride Month and kicking off on May 22, Harvey Milk Day, we’re going to have 40 days of LGBTQIA+ programming that is arts, performing arts, queer arts and queer history, and regardless of what else is happening in the region, we do that every year and we do that every day.”

The California Democratic Party will also host a celebration of Harvey Milk Day, with a virtual ceremony planned for 11 a.m. on May 22. For information, visit mobilize.us/cadems/event/383181.