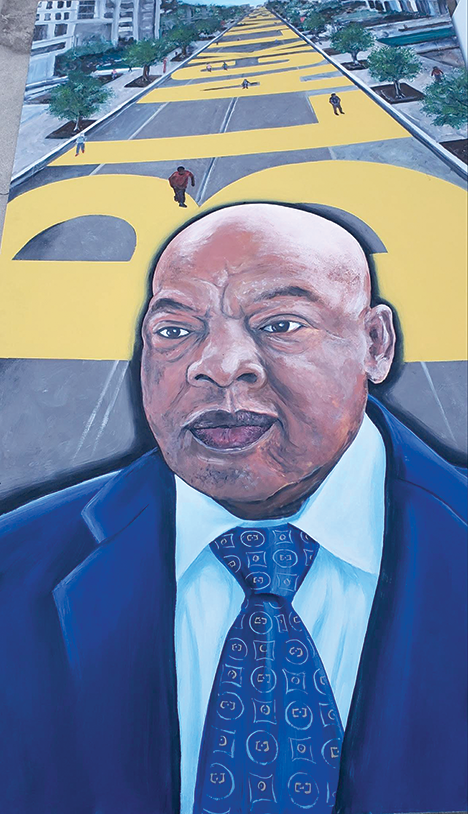 The painting of the late Congressman John Lewis will be displayed in the Central Library downtown. (photo courtesy of the 10th District council office)

The Los Angeles City Council approved a motion on May 18 by Councilman Mark Ridley-Thomas, 10th District, allowing the Los Angeles Public Library to accept a gift of a painting of the late U.S. Rep. John Lewis (D-GA) from Netflix.

In the wake of civil unrest last summer, Meg DeLoatch, creator and executive producer of the Netflix show “Family Reunion,” began sharing stories related to racial profiling. Many of the stories in “Family Reunion,” now in its second season, portray the diverse, multi-generational histories of Black lives. Much of the content was inspired by Lewis, who died on July 17, 2020, after serving nearly 35 years in the U.S. House of Representatives.

As a student, revolutionary, civil rights icon and elder statesman, Lewis dedicated his life to racial and social equity. For decades, he encouraged youth “to get into good trouble,” and he modeled how to achieve it, Ridley-Thomas said.

“I thank Netflix for their honorable contribution to the Los Angeles Public Library. The opportunity to view his portrait in such a sacred public space will be a notable reminder of his life and work,” Ridley-Thomas said. “His life offers important lessons for contemporary generations on how to confront racial violence and transform American democracy. To honor his legacy, we must all continue to get in good trouble, necessary trouble and redeem the soul of America.”

In remembrance of the late congressman, the portrait of Lewis, against the backdrop of the Black Lives Matter Plaza in Washington D.C., will also be featured in upcoming “Family Reunion” episodes. The painting pays tribute to one of Lewis’ last public appearances before his death, amid nationwide protests over the death of George Floyd. It will be on display at Los Angeles’ Central Library downtown.

“Because there was a John Lewis, there is the show ‘Family Reunion.’ We try in every episode to reflect Mr. Lewis’ legacy of integrity, dignity, humor and of course, love of family and mankind,” DeLoatch said.

“We are honored to be gifted with this stunning painting of Congressman John Lewis, an icon of the Civil Rights Movement,” Los Angeles Central Library Director Kren Malone added. “In addition to his extraordinary legacy to social justice, Rep. Lewis was a tireless advocate for libraries, recognizing their power to influence the communities they serve. Rep. Lewis even had a personal connection with the Los Angeles Public Library. His wife, Lillian Miles Lewis, worked as a librarian at one of our branches in the early 1960s. We are truly honored to accept this gift.”