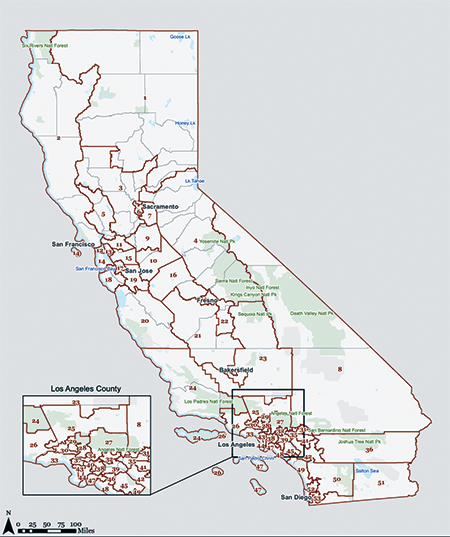 The final 2011 map of congressional districts in California will look different with the state losing one congressional seat. (photo courtesy of the State of California)

When the U.S. Census Bureau announced the results of the 2020 census and congressional apportionments in late April, the California Citizens Redistricting Commission had already been working for months, educating themselves on the process and requirements of redrawing political boundaries in the country’s most-populous state.

Now that it’s known that California will be losing one of its 53 congressional seats, members of the 14-person independent commission are calling on the public to participate in the collaborative process that determines federal funding, political representation and more.

“The census was one step and people let us know where they were. Now we want them to explain to us how they want it to be,” Los Angeles-based commissioner Derric Taylor said this week. “We want everyone’s vote to count, we want you to be able to elect a representative that has your interest at heart, and in doing so, we want you to participate in this process.”

The California Citizens Redistricting Commission was created back in 2010, two years after voters approved a proposition to leave an independent group – made up of five Democrats, five Republicans and four from neither party – responsible for drawing maps that adhere to certain criteria, including keeping districts to equal population, keeping communities of interest together, contiguity of districts and complying with the Voting Rights Act.

More than 22,000 people filed initial interest forms to join the commission back in 2019. That number was whittled down to 2,000 after the California State Auditor determined preliminary qualifications, which included remaining in the same party for the last five years and voting in recent statewide elections.

“I thought it was a very interesting topic and a very unique opportunity for the average voter to get involved in the government process within our state. The process intrigued me, the topic was interesting and the opportunity was very timely for me,” said Ahmad, an unaffiliated party member who works in the Santa Clara County executive’s office.

Taylor, a Republican member, said he joined after hearing a radio advertisement about redistricting. He’s always preached the importance of being civically engaged and felt the commission was a way for him “to put my money where my mouth is.”

Both were part of a final list of 60 candidates – 20 Democrats, 20 Republican and 20 from other parties – who were selected from that pool. The first eight commissioners were selected with a bingo draw, and those eight selected the last six commissioners. They were seated in August.

Perhaps the biggest concern about redistricting is gerrymandering, as other states have faced lawsuits accusing both Republicans and Democrats of redrawing the political districts in ways that benefit a certain political party.

With the loss of a congressional seat in a reliably blue state, as well as a highly politicized climate, both commissioners acknowledged the concern from the public is high. But they said that the fact that the commission is independent, as well as the fact that all their meetings are held in public, with all material available online at wedrawthelinesca.org, should alleviate that.

“There’s lots of items in place that will help us ensure transparency to Californians,” Ahmad said.

Ahmad said that they’re hoping to start a series of public meetings to collect input in the summer. In the meantime, the community can submit feedback at drawmycommunityca.org.

“Personally, I think one of the biggest challenges is managing the COVID-19 pandemic while still trying to engage the community. We’re still living in a virtual world,” she said. “We’re asking a lot for folks to ask to be involved in – census, voting and redistricting. … There’s lots of things going on, so engaging folks is going to be of absolute importance in this process moving forward.”