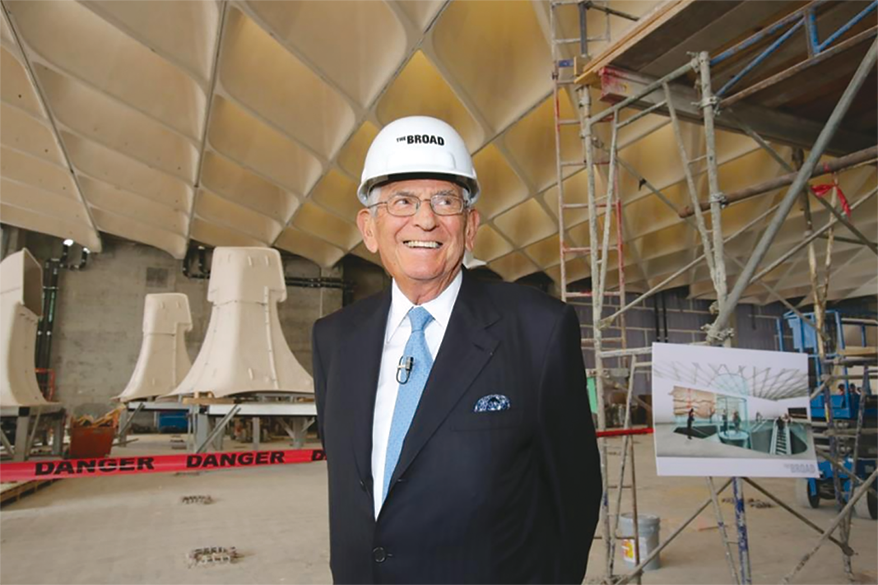 Eli Broad, who along with his wife, Edye, donated $60 million to LACMA to build the Broad Contemporary Art Museum, died at 87. (photo by Ryan Miller © Capture Imaging/courtesy of the Broad)

Eli Broad, a successful businessman and philanthropist whose passion for contemporary art helped reshape downtown Los Angeles and the Miracle Mile as a contemporary art capital, died on Friday, April 30. He was 87.

Broad, who is the only person to found two Fortune 500 companies, including the Kaufman and Broad Home Corporation, discovered his passion for art along with his wife, Edye, after moving to Los Angeles in 1963. Over the next five decades, the Broads donated nearly $1 billion through the Broad Foundations to the city’s arts and culture institutions.

Chief among their philanthropy was making contemporary art and world-class architecture essential to life in Los Angeles for residents and visitors. Broad helped turn Grand Avenue downtown into a cultural thoroughfare and co-founded two museums along the stretch: the Museum of Contemporary Art and the Broad. He and Edye gave $60 million the Los Angeles County Museum of Art to build the three-story Broad Contemporary Art Museum.

“No one spent more time and energy promoting L.A. as an art capital than Eli,” LACMA CEO and Wallis Annenberg Director Michael Govan said in a prepared statement. “His impact on L.A. will be felt far into the future. Though he will be dearly missed, his legacy lives on in so many places including BCAM at LACMA, continuing the Broads’ vision of making great works of art accessible to the public.”

His death prompted tributes from around the city, state and country, lauding Broad for the impact he had on his adopted home. He is survived by Edye and their two sons, Jeffrey and Gary.

“Few people had more of an impact on the city of Los Angeles than Eli Broad,” Sen. Dianne Feinstein (D-Calif.) said. “His philanthropic work influenced fields as diverse as education, science, health care and the arts – especially through the Broad, his world-famous museum. Eli’s generosity is responsible for research programs, schools, museums and other efforts designed to make Los Angeles and California a better place to live. He called himself ‘a builder,’ and that’s the legacy Eli leaves behind.”

“Eli Broad will be remembered as one of the most consequential civic leaders Los Angeles has ever seen,” Los Angeles County Supervisor Janice Hahn, District 4, said. “He loved his adopted city and, through his generosity, helped transform L.A.’s physical and cultural landscape and make it the capital of arts and culture it is today.”

“Eli Broad exerted great influence on envisioning the city’s culture and history by applying his entrepreneurial business acumen to his philanthropic visions,” Los Angeles Councilman Paul Koretz, 5th District, said. “He didn’t just throw money at our city but had a hand in shaping how we remembered the past and designed our future. Everywhere we see his name he made a mark both on a neighborhood and what it would say about the L.A. story in perpetuity. Few people had the kind of influence upon the city of Los Angeles that Eli Broad did.”

His death was announced by the Eli and Edythe Broad Foundation, which along with representatives of the Broad museum, detailed his business accomplishments and philanthropy, which primarily focused on the arts, but extended into the realms of science and medicine. 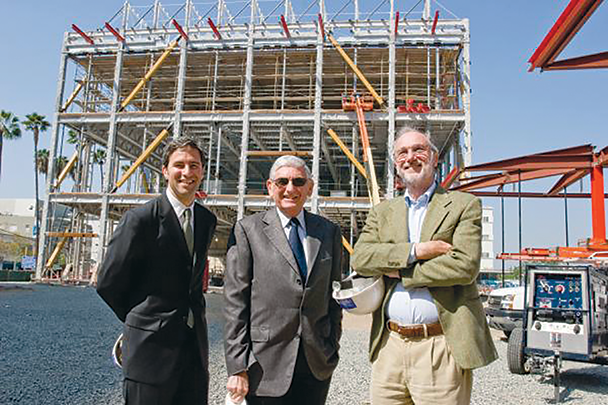 It was a goal of the Broads to share public access to contemporary art, a passion first developed by Edye when she started visiting L.A.’s growing constellation of galleries. She mainly bought works on paper until Eli joined her, and they purchased their first-significant piece: a Vincent Van Gogh drawing in 1972. They later became immersed in contemporary art, feeling that by collecting the art of our time, they could create a meaningful art collection and enjoy the innovations and thinking of living artists.

“And because art of our time reflects many thought-provoking social, political, cultural and racial issues, we knew that contemporary art was what we wanted to collect and share with the public,” Broad told the Beverly Press in 2016.

He played an active role at LACMA since 1973 and served as a trustee since 1995, a stretch that saw Bo and wife donate nearly $70 million to support the museum. That included the lead gift to the Transformation Campaign, which revitalized the museum and expanded the campus, with the addition of the BCAM, which opened to the public in 2008.

“I believe in public institutions,” Broad said in 2008, according to LACMA. “My joy – not only with BCAM, but the entire new LACMA – would be to educate a very broad public here in Los Angeles, and make it a place where people are comfortable.”

He joined other arts patrons to found and create the MOCA in 1979, and served as a trustee until 1984. He announced that they would build a new contemporary art museum – the first entirely new art institution to be built in Los Angeles in nearly 20 years – in 2008. The Broad opened in 2015. Through their foundation, they have made more than 8,700 loans from their personal collection to over 550 museums and galleries around the world, including to LACMA and BCAM.

But Broad’s legacy in Miracle Mile and downtown was not free of controversy. Construction of BCAM prompted pushback and anger from residents and neighbors due to the fact that the entrance wasn’t on Wilshire Boulevard, according to longtime Los Angeles architecture critic Greg Goldin, who is the president of the Miracle Mile Residential Association.

“The street is where you want to have this kind of exchange between its city and its occupants and the cultural institution,” he said. “I think it was a major failure on the part of Broad. … It goes beyond being symbolic when you turn your back on the boulevard. It’s also another way of saying things along the boulevard don’t count.”

Goldin also critiqued his efforts along Grand Avenue, both for its gentrification of the Bunker Hill neighborhood, but also for the fact that decades later, that dream of a cultural thoroughfare has not become a reality. While Broad was not the only developer of Grand Avenue, he pushed the hardest, Goldin said.

“It amounts to a megabucks development that still is completely hollow on a boulevard that is completely vacant – and I’m not just talking about during a pandemic, it’s been vacant for decades,” Goldin said. “I think that when one looks at Broad, one sees a man whose money entitled him to impose an urban vision that I think in the end has done far more harm to L.A. then the splendors of either the individual buildings or the large [dollars] he presumably doled out because of his millions. I think Grand Avenue is one of the worst places in the city and continues to be. And Wilshire Boulevard ain’t doing too much better.”

Goldin and others also described a falling out between Broad and LACMA, the details of which aren’t completely known, but likely stem from broken promises regarding BCAM. Broad leaned into his reputation regarding business and philanthropy, writing the autobiography, “The Art of Being Unreasonable,” which focused on his goals of moving on to the next endeavor.

A LACMA representative did not respond to a request regarding the issue.

“It was fraught with dispute,” said Stephen Kramer, president of the Greater Miracle Mile Chamber of Commerce. “There was the understanding on many people’s part that Mr. and Mrs. Broad were going to donate a significant amount of their art collection to the Broad that was being built on the LACMA campus. Ultimately, they changed their mind, and that was kind of a big disappointment.”

Following the issues with LACMA, Kramer said Broad turned his energies away from Miracle Mile and more toward downtown. But he lauded Broad’s efforts, saying his intentions were always good.

“I think the degree of his passion in caring about the arts is a positive about this community and the larger community,” Kramer said. “And whether people like his style, he certainly enhanced the arts community and the importance of that community, not just in this neighborhood, but all over Southern California.”

The Broads also invested more than $650 million to improve America’s public schools, as of 2016, and are working to find different ways to further incentivize the public school system. After seeing academic improvements throughout the charter systems, they made the controversial decision to also invest more than $144 million in developing high-quality public charter management organizations.

But ultimately, it will be Grand Avenue in downtown where their legacy is most felt. In addition to museums, Broad helped fundraise roughly $300 million to build the Walt Disney Concert Hall on Grand Avenue and was also a longtime supporter of the LA Opera.

But he considered the Broad their crown jewel.

“We want as many people as possible to have access to the museum and the art within,” he said in 2016. “Where other cities are insular and exclusive, Los Angeles embraces people from all walks of life. This museum’s collection is our gift to Los Angeles.”

“Our heart is on Grand Avenue in downtown Los Angeles,” he said.