Hotels, including the Beverly Wilshire, will benefit from the $3.4 million allocated to the Beverly Hills Conference and Visitors Bureau. (photo by Brica Wilcox/courtesy of the Rodeo Drive Committee)

Beverly Hills plans to continue to make big investments in tourism and hospitality to help restore the city’s tax base, which was hampered by the pandemic.

One of the contracts, which provides nearly $489,000 to the Beverly Hills Chamber of Commerce, was unanimously approved as part of the council’s consent calendar. The other two contracts, awarding more than $158,000 to the Rodeo Drive Committee and more than $3.4 million to the Beverly Hills Conference and Visitors Bureau, were met with support from the council members, though they will return for formal adoption next month.

Laura Biery, the city’s marketing and economic sustainability manager, said the chamber’s contract was approved on May 13 “so they can get started right away.”

“The way I view it is that this is an investment in the continued success of the city and that, in tough times like we’ve been in, it’s important to continue to make that investment,” Mayor Robert Wunderlich said.

Wunderlich noted that the recovery period has begun, but more work needs to be done.

“If you walk the streets, you can see that we’ve emerged [from the pandemic] strongly, but we have to stay focused on that,” Wunderlich said.

Some of that work will be done on the internet by the Rodeo Drive Committee, which is working with the Los Angeles branch of the multinational public relations and marketing agency Bold. RDC President-elect Kathy Gohari and representatives of Bold advised the council that they plan to focus on five social media platforms: Instagram – the primary channel – plus Pinterest, Facebook, TikTok and Clubhouse.

Juliane Kringe, vice president of Bold, recommended “focusing on these five channels and doing it right as opposed to spreading it out” to other platforms like Twitter, Snapchat and YouTube.

The council members were unanimous in their support for the plan, which Councilman Lester Friedman noted “will certainly help our brand” as a city.

“I think the content that has been created has been great, and you have unanimous support from us. Keep up the good work,” Wunderlich said.

The council members were similarly effusive in their praise for the BHCVB and Beverly Hills Chamber of Commerce, which laid out plans for a hopeful return to in-person events, which will bring back shoppers and hotel guests, aiding an industry that was especially hard-hit by the pandemic.

“I feel very strongly that we have the best CVB, the best team, out of anywhere – bar none – in the United States,” Councilwoman Lili Bosse said. 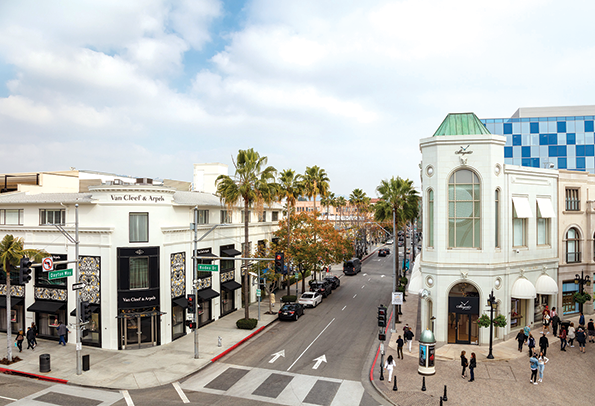 Several groups aim to bring shoppers back to Rodeo Drive stores and other Beverly Hills businesses. (photo by Brica Wilcox/courtesy of the Rodeo Drive Committee)

Blair Schlecter, vice president of economic development and government affairs for the Beverly Hills Chamber of Commerce, said the immediate priority is to help local businesses get on the path to reclaiming their pre-pandemic success.

“Our plan for this next fiscal year is to ensure a quicker business recovery, which results in revenue for the community and the city, which helps support and enhance our already wonderful city services,” said

The business groups said they hope to bring back conferences to the city, as well as bring city leaders back to New York City and on other trips to attract new businesses to the city.

“We think there’s a lot of opportunities for business attraction,” Schlecter said.

Beyond the next year, Councilman John Mirisch said it’s important to consider the city’s place as a destination for a significant time to come.

“This is about positioning us for the long term as a place where people want to go,” Mirisch said.

One concern, however, was raised by Councilman Julian Gold, who pushed multiple times for metrics or other measures of success from the groups. Gold and Wunderlich supported the BHCVB, RDC and Beverly Hills Chamber of Commerce in finding a way to measure return on investment.

“I’m just questioning if there’s something we can do that would be a more objective look at our performance,” Gold said.

Despite his request for more information, Gold was clear that he joins his colleagues in strongly supporting the business groups and appreciates the work they do for the city.

“The chamber is really ground zero for our businesses and their return to health,” Gold said.