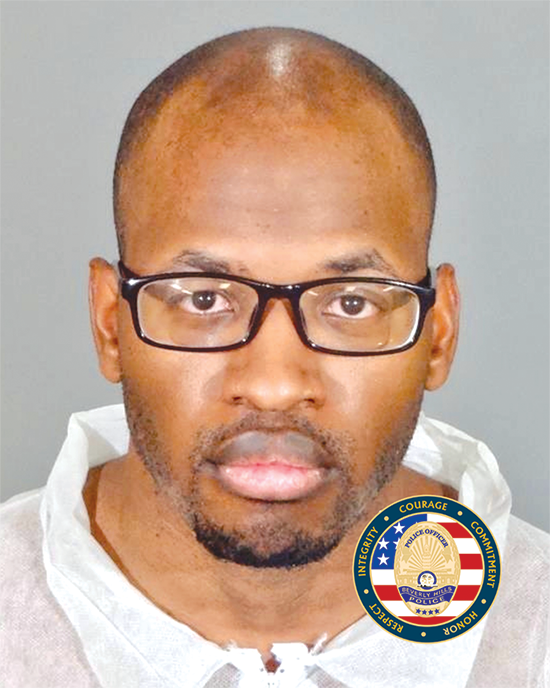 Beverly Hills Police Department officers arrested a man on May 2 who detectives believe is responsible for a series of burglaries in Beverly Hills dating to last summer.

Rockim Prowell, 30, of Inglewood, was taken into custody during a traffic stop at an undisclosed location in Beverly Hills and has been charged with two counts of burglary, two counts of grand theft and one count of vandalism, police said. He is next expected to appear in court on May 25.

The BHPD announced the arrest on May 7. Officers pulled over a vehicle driven by Prowell and found items allegedly stolen during residential burglaries in Beverly Hills on July 20, 2020, and April 20, 2021. A rubber face mask of a white man with red hair allegedly worn during the burglaries was discovered along with undisclosed property belonging to the homeowners, police said. License plates on the vehicle Prowell was driving were also allegedly stolen.

Police recovered security camera footage of a vehicle that was allegedly tied to both burglaries, and Prowell was allegedly driving the vehicle when he was pulled over on May 2, police said. Following the arrest, BHPD investigators served a search warrant at Prowell’s residence in Inglewood and found more property believed to have been stolen during the crimes in Beverly Hills, as well as possible stolen property from other burglaries in the Los Angeles Police Department’s West Valley and Pacific divisions, and other cities.

“Detectives are working with investigators from the Los Angeles Police Department and the Newport Beach Police Department,” Capt. Max Subin said in a statement. “We believe that the suspect is responsible for numerous residential burglaries within the Southern California area.”

No further information was available because of the ongoing investigation and pending court proceedings.

Anyone with information about the suspect or burglaries is urged to call the BHPD at (310)285-2125. To remain anonymous, text BEVHILLSPD followed by the tip information to 888777, call Crime Stoppers at (800)222-8477 or visit lacrimestoppers.org.