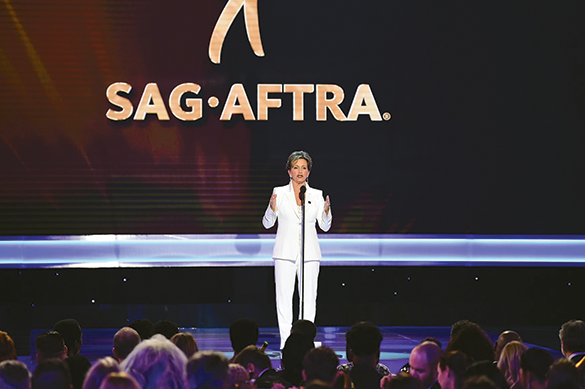 Gabrielle Carteris starred on “Beverly Hills, 90210” and was one of the first to speak out about the abuse of Harvey Weinstein and the culture of sexual harassment in the entertainment industry. (photo courtesy of SAG-AFTRA)

“It is my profound honor to be elected president of the International Federation of Actors,” Carteris said. “For nearly 70 years, FIA has been a leader and fighter for actors around the world. FIA has worked tirelessly to make stages, sets and studios more diverse and equitable, in addition to creating a culture of respect and accountability in the entertainment, media and performing arts industry that transcends international boundaries. I am grateful to Ferne Downey for her leadership as president over the past nine years and look forward to working with my colleagues across FIA in the years ahead.”

She will play a fundamental role in securing actors’ conditions of employment and supporting actors’ endeavors by sharing experience, providing technical expertise and conveying the solidarity of its worldwide membership. Carteris will also play a leading role in fighting for fair representation, inclusion, accessibility and equal opportunities in the entertainment, media and performing arts industry. In all of this work, Carteris will uphold the special status accorded to the cultural sector.

“Gabrielle has spent her entire career in the entertainment industry, whether as an actor herself or standing up for workers in her role as SAG-AFTRA president, and I’m confident she will be a fantastic president of the International Federation of Actors,” said Dominick Luquer, FIA secretary general. “We must continue our critical work to expand the protections of collective bargaining and make the entertainment industry more inclusive, supportive and safe for workers all over the world. It’s clear that Gabrielle has a deep-rooted commitment to protecting each and every worker in our industry, and I’m so proud and grateful to welcome her as International Federation of Actors president.”

Carteris is a career actor who came to prominence playing Andrea Zuckerman on the hit Aaron Spelling drama “Beverly Hills, 90210.” She was first elected SAG-AFTRA president in April 2016 and previously served as the elected executive vice president from 2013 to 2016. In 2017, she was among the first to speak out about the abuse of Harvey Weinstein and the culture of sexual harassment in the entertainment industry and worked with SAG-AFTRA to develop steps to report and curb incidents of sexual harassment in the entertainment industry.