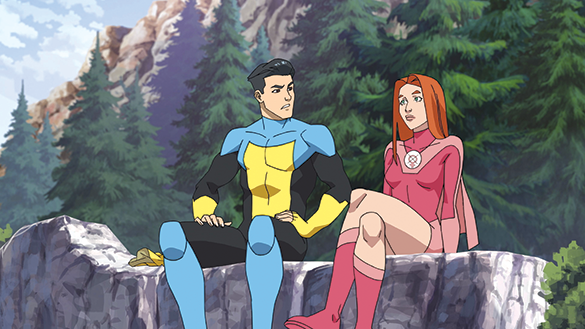 Invincible and Atom Eve are among the fun and memorable characters that bring the new animated superhero series “Invincible” to life. (photo courtesy of Prime)

Amazon Prime’s new series “Invincible” joins a growing list of both adult-oriented superhero media and animated fare. Separately, such things seem standard, mundane even. But with their power combined, the first season poaches a 2D aesthetic dominated by the morning cartoons. The effect is unnerving yet natural for a fan base that’s all grown up.

Beyond the big two’s comic book dominance (Marvel and DC do share limited copyright on use of the term “super hero,” after all), outside superhero creators must distinguish themselves. Streaming services seem to do the same. Disney+ has the Marvel Cinematic Universe. HBO Max borrows some CW content along with grittier DC originals. Who knows what’s happening with Netflix following severed ties with Marvel Television (the recent “Thunder Force” tragically flopped).

Meanwhile, Prime favors more meta options. A remake of “The Tick” parodies the superhero genre. Then comes “The Boys,” a live-action adaption of the Dynamite comic about a covert team charged with keeping superheroes in check. Both the print and TV versions shirk the idealism of heroic figures, presenting toxic hyper-celebrity surrounding supercharged, and very flawed, individuals prone to vanity, addiction and corruption.

“Invincible,” created by Robert Kirkman (“The Walking Dead” creator as well) for Image Comics, builds on Prime’s previous offerings. While it might be less nihilistic than “The Boys,” less concerned with the correlation between superpower and fascism, it does present a similar concern: what if Superman is a bad guy?

This is hardly a new topic. DC itself has explored it in Frank Miller’s “The Dark Knight Returns,” Alex Ross’s “Kingdom Come” and Mark Millar’s “Superman: Red Son.”

But “Invincible” adds a particularly pressing concern, one ripped from the source’s pages, dating back almost 20 years: collateral damage. As high schooler Mark Grayson (voiced by Steven Yeun) finally gets his powers, a forgone outcome considering his father Nolan is world-renowned Omni-man (J.K. Simmons), the gig requires a delicate balance of punching and protecting.

Mark’s inaugural attempt to defend Chicago from invasion ends in several failures that cost lives. Sure, a Good Samaritan defense didn’t make things worse. In fact, he even distracts those pesky tech-loaded green men long enough for others to escape, fellow caped crusader Atom Eve, and his classmate Samantha (Gillian Jacobs). But the trauma and anxiety of great power and great responsibility haunt Invincible, a name more optimistic than proven.

What makes “Invincible” so refreshing isn’t new; it dates back to 2007’s “Superman: Doomsday,” a direct-to-video animated feature rated PG-13 for violence, including some implicit blood spatter and even a deer killing. Of the more than 40 DC animated flicks pumped out since then, most target an older audience, some even boasting an R rating. 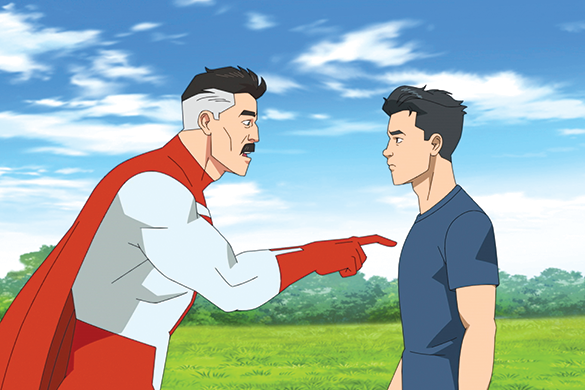 Omni-man’s son Mark Grayson gets his powers in high school and becomes the superhero Invincible. (photo courtesy of Prime)

Perhaps the most prominent architect of this arrived in the early ‘90s, “Batman: The Animated Series,” presenting more mature stories still appropriate for Saturday morning cartoons.

“Invincible” rides that trend to extremes. What Warner Bros. Animation did in moderation, this eight-part season does in excess. And that familiar 2D style serves as a jarring juxtaposition to superhero fandom’s expectations.

A few jokes soften the blow, including welcome cameos like Seth Rogen voicing Allen the Alien and Jon Hamm as a security guard facing the frailty of life, but things are mostly quite dire. Mark navigates school, a new relationship with Amber Bennett (Zazie Beetz) and, of course, remaining on call for the Global Defense Agency, run by Cecil Stedman (Walton Goggins), a stand-in for Nick Fury and other covert types.

From the opening scene, “Invincible” begs for a DC comparison with overt similarities between DC’s Justice League and the Guardians of the Globe. There’s a speedster, a shapeshifting Martian, a guy named Darkwing (hmm), a king of Atlantis and a warrior woman, simply called War Woman (Lauren Cohen). Mind you, such winks to comics history serve a purpose. That history, all the good and bad, rational and contradictory, is on trial.

The printed page enjoys decades scrutinizing this topic, but TV series and especially films mostly pay lip service without extensive commitment. Superhero media needs what “Invincible” has. It might not appeal to everyone, but those who can stomach the graphic bits – see them for what they meaning on a grander scale – are in for a wild ride.