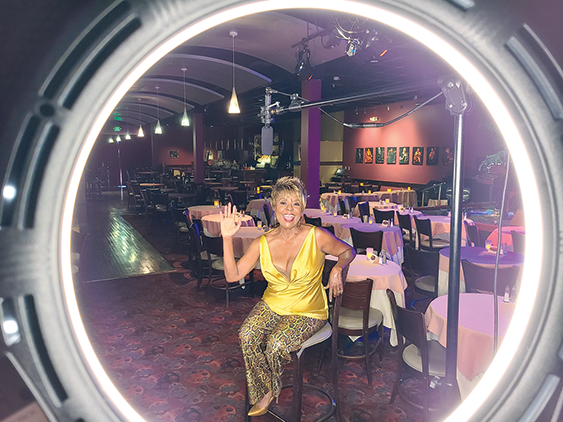 Grammy Award-winner Thelma Houston was among those who recorded a virtual concert for the Catalina Jazz Club as the longtime Hollywood music venue remains closed because of the pandemic. (photo courtesy of Chris Isaacson Presents)

As the coronavirus cases continue to decline in Los Angeles County, restaurants, movie theatres and museums have slowly started the process of reopening to members of the public eager to get out and enjoy live entertainment.

But at least one business, the Catalina Jazz Club, has been stuck waiting for the “green light” as the Los Angeles County Health Department’s efforts to mitigate the spread of the virus continue to limit live entertainment from reopening.

“We didn’t expect to stay closed this long,” manager Manuel Santiago said. “It’s been very stressful the past year, especially because of the uncertainty as to what’s going on. We hear that some places are opening up, but they just won’t let us do it because of the live music.”

That has spelled trouble financially for the Catalina Jazz Club, which for 34 years has hosted the likes of Dizzy Gillespie, Art Blakely and Max Roach at the intimate venue at 6725 Sunset Blvd. in Hollywood, and is hoping not to go the way of other shuttered live music clubs that have been forced to close during the pandemic, such as the Blue Whale and Rockwell Table and Stage.

“It’s a very special type of music,” Santiago said. “We don’t want jazz to die down.”

Meanwhile, expenses for the club have started to rack up for rent, insurance, utilities and payroll to keep their staff, he said. They’ve been recording private shows, with some musicians donating their time for clips to post on YouTube and Facebook. They’ve also started selling merchandise online.

But the management has otherwise kept the venue and bar and grill closed, saying their patrons come for the music first and food second. He admitted the situation is frustrating, because unlike bars and theaters, which have been allowed to reopen, their layout allows for social distancing.

They’ve turned to GoFundMe for donations – and have raised approximately $130,000 of a $175,000 goal to help cover the costs. But Santiago said he’s hoping that the club, where he’s worked since it opened, can reopen soon.

“This may take us all the way through the end of May or early June,” he said. “I’m honestly hoping that we’ll be ready to open at the latest, July.”

The closure of the club has been “heartbreaking” for the jazz community, including legendary jazz musician Corky Hale. She said she has played the club so many times it’s hard to recall all the performances, but pointed to tributes to Billie Holliday as well as a show with her daughter-in-law, Tricia Tehara, as her favorites.

“Catalina is a very lovely place,” she said. “I pray all the time that we get back to normal so we can have good concerts.”

“We have to try and help whatever jazz clubs [are left] because they’re going out of existence,” Hale said. “There’s a lot of great jazz performers still alive.”

For Santiago, he said the waiting is the hardest part.

They have their entire reopening planned out. The club will start with smaller, local performers before bringing out the “big guns.” They’ll also pay tribute to jazz musicians and former performers who died during the last year, including Chick Correa. They just need the go-ahead.

“We are really waiting for the green light to get going for this,” he said. “I started praying because we don’t want to close down permanently.”

This is a wonderful venue. I have so many memories here, from seeing McCoy Tyner on piano (i.e., John Coltrane’s pianist), to my wife and I having our first date here. The ambience is great. All the more true since the time that the Jazz Bakery of Culver City closed, this is the Los Angeles jazz venue with the very best acts. May the Catalina Jazz Bar and Grill live long and once again prosper.