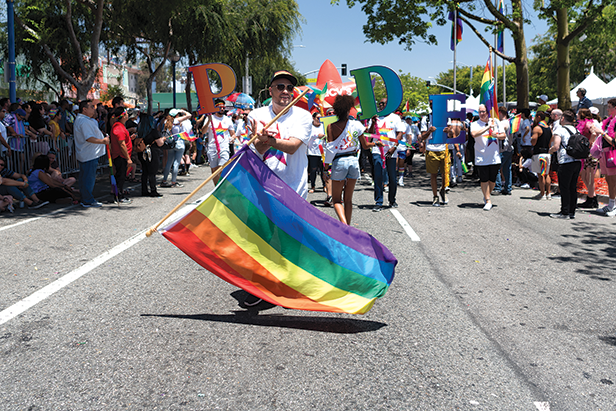 West Hollywood hasn’t hosted a city-sponsored Pride event since 2019 due to the pandemic. (photo by Jon Viscott/courtesy of West Hollywood)

West Hollywood is moving forward with a pared-down Pride for 2021.

The City Council voted unanimously on April 19 to authorize $110,000 for this year’s celebration, including approximately $50,000 set aside for public safety costs and $10,000 for the West Hollywood Chamber of Commerce to put on an event for the transgender community.

The city will not host in-person events of its own, instead choosing to help local businesses put on their own Pride-related events, especially those that utilize the OUT – Outdoor Use Temporary – Zones and OUT on Robertson, a weekend-only program that limits a portion of Robertson Boulevard to pedestrians.

“We as a city had decided pretty much through the end of this calendar year that we weren’t going to do in-person events, at least not sponsored by the city,” Mayor Lindsey Horvath said. “I think we’ve made that decision, as far as city programs, but I am very interested in helping all the businesses who want to participate in a Pride experience that’s an in-person experience. Use the OUT Zone program, use the OUT on Robertson program, safe spaces we have created already and we can enhance and activate accordingly to really bring to life a Pride experience in West Hollywood.”

Mayor Pro Tempore Lauren Meister agreed that the city should “let the restaurants and the bars benefit from this, rather than some open space where we can’t control, necessarily, the crowd.”

“The restaurants and bars will have to control the crowd. That’s their job,” Meister said.

Council members and city officials made clear that even without a city-sponsored in-person event, they were expecting large numbers of people to come to West Hollywood to celebrate Pride.

“As we progress toward June, it does seem that there is going to be more and more opportunities for people to come out,” Councilman John D’Amico said. “Based on what I saw this weekend, if you turn the lights on, people show up, so we need to be prepared for fairly robust crowds.”

City Manager Paul Arevalo agreed with D’Amico’s assessment, but added that it’s important for West Hollywood to maintain its position as a local home for Pride celebrations after Christopher Street West announced last year that it was pulling its LA Pride festival from West Hollywood.

“West Hollywood is going to be packed to the gills whether we do something or not … I’m not necessarily worried that businesses aren’t going to be busy. What I am worried about though is losing another year of maintaining our unique brand and being inviting to the community and keeping our doors open,” Arevalo said.

Though much of the council was in agreement on the broad strokes of the plan for Pride, there was some debate over finances. Genevieve Morrill, president and CEO of the West Hollywood Chamber of Commerce, had sought at least $165,000 to help put on Pride and perform outreach to area businesses. In comparison, the 2019 event was funded with approximately $2 million from the city.

Councilwoman Sepi Shyne said she thought $165,000 was “a stretch” given the financial issues caused by COVID-19.

“We’re still in the economic downturn of the pandemic,” she said.

“Putting things on the screen are fine. I don’t think anyone’s going to watch it,” Erickson said. “If I was at Rocco’s or OUT on Robertson or somewhere where there was a screen, and Demi Lovato or whoever is playing, cool. I’m not going to watch it. I’m going to hang out with my friends. I think that’s money that we don’t need to spend in that way. I think people are Zoomed out.”

Instead of creating programming, the chamber will defer to digital content from the city’s Arts Division created for One City One Pride, Morrill said.

There was some discussion about bringing the Pride plan back for discussion in early May, but Morrill said it was important to make the decision on April 19, as June is quickly approaching.

“Every time we delay it costs more money, and that’s the facts. We need decisions tonight on how much you want to spend and what exactly you want to do, and we will do the best job we can for you,” Morrill said.

The council then agreed to move forward with the $110,000 budget.