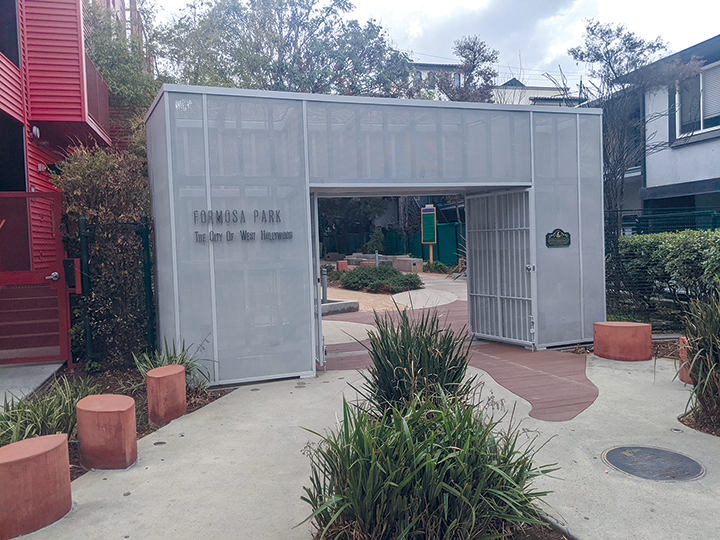 Formosa Park is one of two public parks in West Hollywood with Certified Wildlife Habitat designation through the National Wildlife Federation’s Garden for Wildlife program. (photo by Justin Sayers)

The West Hollywood City Council has designated the latter part of April as its inaugural West Hollywood Green Week 2021, where the city will share information and host events to focus attention on their environmental efforts and initiatives, all in conjunction with Earth Day.

The council unanimously voted during the April 5 meeting to formalize and promote the celebration, which city staff said in a memo is “envisioned as a focused community information and education effort.” The week will serve as a showcase of the city’s achievements, raise awareness and deepen community engagement around sustainability, health and wellness, and growth opportunities, the memo said.

The city will announce a definitive schedule of dates and events throughout the month, but the week is aligned with Earth Day on April 22. This year’s Earth Day theme is “Restore Our Earth.” The city’s programming will provide a local-oriented perspective on urban forest stewardship methods, best practices for restoration and regeneration, and ways to monitor how land-use policies and nurtured ecosystems can remain in dynamic balance moving forward. Participants will learn how to become better connected to nature and healthier living, as well as how to participate in enhancing West Hollywood’s ecosystem.

Other scheduled programming during Green Week include the annual Green City Awards Program, which recognizes projects and practices that demonstrate excellence in environmental sustainability, participation in the National Wildlife Federation’s Mayors’ Monarch Pledge to mark the city’s commitment to save the monarch butterfly and other pollinators, the creation of two Certified Wildlife Habitats through the Garden for Wildlife program of the National Wildlife Federation at sites to be determined, and promotion of the city’s Greening West Hollywood Plan, which encourages public and private participation and supports greening efforts throughout the city.

The public is also encouraged to attend the city’s free educational virtual symposium called “Urban Forestry and Biodiversity: Urban Environments in Concert with Nature,” on April 24 from 9 a.m. to 1 p.m. The symposium will feature community members along with natural and built environment experts, and will explore the topics of urban forestry and biodiversity through four lenses: urban flora (tree canopies and biodiverse green spaces), urban fauna (West Hollywood’s native wildlife residents), biomimicry (learning lessons from nature) and biophilic and regenerative inspired design.

“I am thrilled that the city is hosting this virtual symposium on urban forestry and biodiversity, bringing together the West Hollywood community with experts on the natural and built environment,” West Hollywood Councilwoman Lauren Meister said in a statement. “The future is green!”

The city is hoping that the Green Week can focus attention on the city’s program and policies related to its natural and built environments, ecology and sustainability.

City initiatives they’re hoping to highlight include their annual tree planting event, Heritage Tree Program, which protects designated heritage trees, whether located on public or private property, and the city’s Urban Forest Management Plan, which identified 68 actions as part of an effort to sustain, protect and enhance the urban forest in West Hollywood. They also oversee two public parks with Certified Wildlife Habitat designation through the Garden for Wildlife program by the National Wildlife Federation at Havenhurst and Formosa parks.

Lastly, the city is hoping to continue its engagement with its Climate Action and Adaptation Plan – dubbed “WeHo Climate Action” – which highlights location actions to meet the needs of the changing climate.

“The plan will establish more aggressive greenhouse gas emissions reduction targets, obtain feedback from those who are most impacted by climate change, empower the community to play an active role in creating a sustainable future, and support a vibrant and sustainable city for current and future generations,” the city said in a press release.