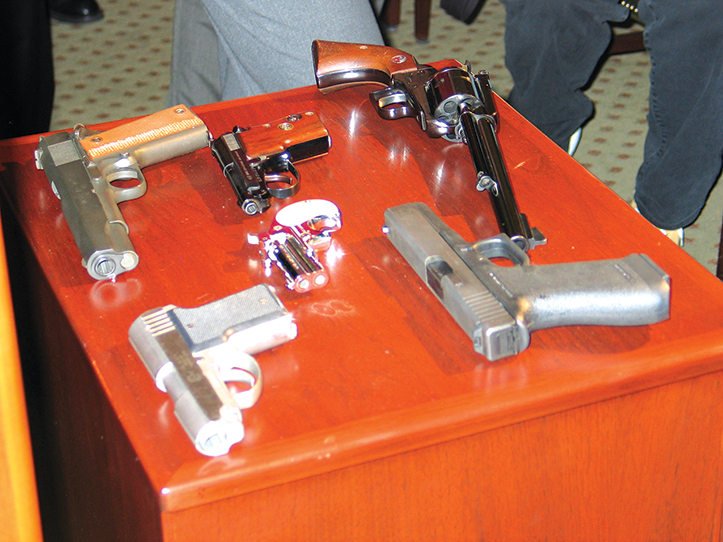 The West Hollywood City Council will consider an ordinance that would require all firearms to be stored in a locked container or disabled with a trigger lock in residents’ homes. (photo by Edwin Folven)

The city of West Hollywood took the first step on April 15 toward passing a Safe Gun Storage Ordinance, despite concerns from some that the law could potentially leave the city open to a lawsuit.

The City Council unanimously directed staff to draft the ordinance, which would require firearms to be securely stored in a locked container or disabled with a trigger lock in residents’ homes. It was passed with limited discussion as part of the consent calendar and will be brought back for a first reading at a future meeting.

The move came despite some concern from residents, who questioned during the public comment portion of the meeting whether the law would violate constitutional rights of gun ownership and self-defense. Those concerns extended to include Councilman John D’Amico, who said he felt the initial language in a staff memo could result in litigation.

“I don’t support gun ownership, but they are legal things, like cigarettes and automobiles. They kill people,” he said. “But I also know that requiring people to have their weapons locked in their home when they are by themselves or with their partner, to me, I’m not sure I understand that. … I do think there is some sensible gun storage language that is missing from this that might make more sense in terms of whether or not this turns into a lawsuit.”

City Attorney Lauren Langer said preliminary research has been conducted and found similar laws have been passed in the state, including one in San Francisco that held up to a federal court challenge. The city of West Hollywood ordinance would be modeled after that law, she said.

“It’s always helpful to hear some of the legal issues and legal hurdles with different topics as early in the process as possible, so that we can research and craft ordinances appropriately,” Langer said. “I want to be clear to the public that the direction tonight is just for my office to look into the ordinance and draft an ordinance that will come back at a future meeting. At a future meeting, there will be actual language and an actual ordinance to discuss as opposed to the high-level concepts that were raised in staff reports.”

In the memo, city staff noted that the proposed ordinance was brought to the council for consideration by Moms Demand Action for Gun Sense in America, a nonpartisan organization aimed at reducing gun violence and improving gun safety. Other cities have adopted similar safe gun storage ordinances, including Los Angeles and Culver City. The push for safe storage laws comes amid a rising number of gun purchases and gun-related deaths, the majority of which are suicides.

California law requires firearm owners to keep guns safely secured and stored and requires trigger locks to be sold with guns unless the buyer proves they own a gun safe. But the law does not define what safe storage means, leading to many owners engaging in improper safety and storage practices, according to the memo.

“The proposed Safe Gun Storage Ordinance would require all firearms in a residence be securely stored in a locked container or disabled with a trigger lock,” the memo read. “The ordinance defines a locked container as a secured container that is fully enclosed and locked by a padlock, keylock or similar locking device and a locking device (or trigger lock) as any device, when applied to the firearm, renders the firearm inoperable. The proposed recommendation to draft a Safe Gun Storage Ordinance may prevent the unintentional deaths of children and teen suicides by as much as 85% depending on the type of storage and can also prevent guns from being easily stolen in the case of a home invasion. Department of Justice-approved safe gun storage devices can be purchased for as little as $40 and trigger locks are often distributed for free at police stations.”

While the motion passed, other members of the council, including Councilwoman Lauren Meister, wanted to ensure that there will be further discussion about the ordinance once it is brought back to council, and that it won’t again be included on the consent calendar.

“It’ll be an item that the council can discuss and take public comment on,” City Manager Paul Arevalo said.

Trial college to be held next month in Cabo