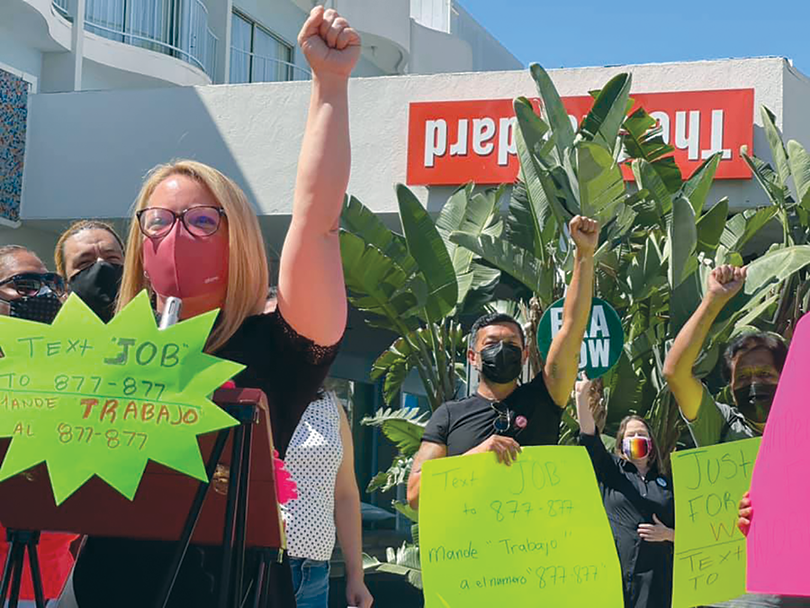 The West Hollywood City Council took the first step toward instituting an ordinance that would offer new protections to hotel workers from issues such as inadequate compensation, overwork and sexual assault.

The council voted 3-1 during its meeting on April 19 to direct city staff to meet with stakeholders, including hotel employees, owners and the West Hollywood Chamber of Commerce, to come up with an ordinance and bring it back to council within 60 days for discussion.

“What we’re trying to do is establish standards for safety and protection of the workers and make sure that policies are put in place to provide for them returning to work and that the jobs they return to are safe,” said Mayor Lindsey Horvath, who co-initiated the proposed ordinance. “What we’re trying to do here is give direction for an ordinance to be drafted that actually protects those workers, validates the work that they’ve been doing, and honors their work as part of the success that brought all of those businesses to the point before COVID.”

She pointed to the city of Santa Monica, which first passed a similar ordinance that will be used as a model for West Hollywood, after ensuring they met with all the required stakeholders before drafting their policies.

“It’s not a good practice in this city not to do engagement,” Meister said.

Councilman John Erickson disagreed, saying that the council’s vote to draft the ordinance before further discussion with the public does just that.

The discussion came at the end of the council meeting, and lasted well past midnight. It was done without the attendance of Councilman John D’Amico, who exited early due to the late time, after he and Meister unsuccessfully pushed for the discussion to be tabled to another meeting.

“I was elected to serve and represent the city,” Erickson said after D’Amico left. “I understand he has different priorities, but I’m here until whenever we got to go.”

The vote also came hours after Horvath and Councilwoman Sepi Shyne, the other co-initiator of the ordinance, appeared at a press conference earlier in the day outside of the shuttered Standard Hotel in West Hollywood to urge the passing of the motion. 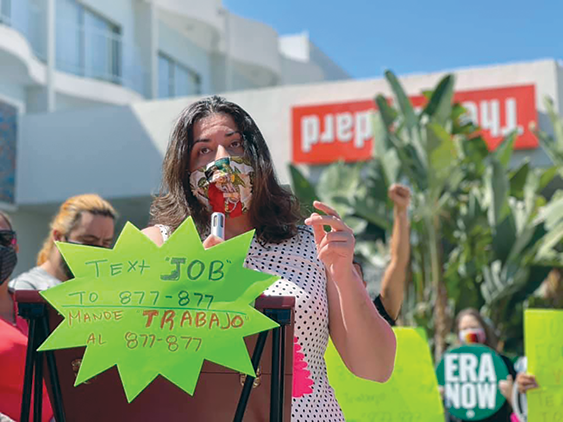 West Hollywood Councilwoman Sepi Shyne spoke at a press conference supporting a policy to ensure that hospitality workers can return to work as the economy reopens after the pandemic. (photo courtesy of Unite Here Local 11)

Laid-off workers, advocacy groups and union representatives spoke during the press conference, saying the ordinance would ensure that hotel workers, many of whom were laid off during the pandemic, and many of whom are immigrants and members of the LGBTQ community, have jobs to return to once as the economy reopens.

They detailed issues that existed prior to the pandemic, including the risks of sexual assault or other threatening conduct for workers who are alone in guests’ rooms, inadequate compensation for heavy workloads and lack of comprehensive and standardized training.

“As a member of the LGBTQ community, I know West Hollywood prides itself in being a city of inclusion and equality. I hope the council leads with these values today and stands with hospitality workers like myself who help this city thrive,” said Jesus Ortiz, who worked at the Standard as a cook for four years before it closed.

“As a housekeeper, having protections from the risk of sexual assault, like panic buttons, would make me feel safer since I often have to work alone in isolated areas of the hotel,” said Norma Hernandez, who has worked at the Mondrian Hotel for 13 years.

Shyne said the ordinance would help West Hollywood as it actively works to close the gap of social, racial and workplace inequality.

“I am proud to work with Mayor Horvath to bring forward this item which will provide basic workforce protections for hotel workers who are often cleaning more rooms per day than the industry standard, putting their personal safety on the line when they enter rooms without any protective equipment such as panic buttons, allowing workers to return to and retain the jobs they love with dignity and requiring safe reporting and training,” she said during the press conference. “The free market has not provided these overdue protections for workers, which is why we must intercede.”

The proposed ordinance has already generated much feedback, prompting more than 50 comments, either made electronically or during the public comment portion of the council meeting. It generated a wide spectrum of support and opposition.

Rod Gruendyke, vice president and general manager of the Sunset Marquis Hotel, wrote a letter to the council in opposition of the ordinance, saying that the hotel has taken a number of steps both before and during the pandemic to ensure their workers’ safety and security.

“During my 31 years as the general manager of the Sunset Marquis, I have never been more concerned that the City Council will approve an ordinance that will do harm to the city of West Hollywood. It will affect workers and local businesses at a critical time of recovery for our hotel and tourism industry – an industry that contributes a significant amount in tax revenues to the city of West Hollywood,” he said. “Additionally, we did not receive any notification or any outreach in advance of a directive to draft an ordinance which has such a significant impact to our hotel. I do not recall anyone asking us what we already provide our employees for safety, security and training, nor what wages we pay our staff. It should not be the government’s role to interfere in our business model, operations and procedures unless there is material cause to do so.”

Many pointed to the West Hollywood Chamber of Commerce’s Hotel Council announcement earlier this month of a “5-Star Promise,” to pledge to provide safe environments for hotel employees and opportunities for marginalized community members. It also included a pledge to provide industrywide training and materials on safety and security and to provide hotel employees with safety devices, such as panic buttons, to help them feel safe on the job.

West Hollywood Chamber of Commerce CEO Genevieve Morrill said that they sent several letters to the city, reiterating the steps hotels have taken in terms of promoting public safety and looking out for their workers. She labeled it as a political move for some members of the council.

“We’re opposed to it strongly. It’s government overreach,” she said.

She added that city staff had not contacted the chamber, as of Wednesday afternoon, but they plan to continue to voice those concerns should they be contacted during the actual drafting of the ordinance.

In recent months, many cities in the region have passed recall and retention efforts, including Santa Monica, Los Angeles Long Beach and Los Angeles County. But Santa Monica went further with their ordinance, passed in 2019, which provided panic buttons and other measures to report misconduct; provisions to ensure hotel housekeepers are compensated fairly when they are required to perform unreasonable workloads; required training for housekepers; and required education and training to identify potential instance of human trafficking, domestic violence, sexual violence and public health and safety.

Meister said she supported all the initiatives, except for the compensation portion, noting that it’s hard to quantify what should be left up to the business community and the workers to negotiate.

“I appreciate all the speakers and I feel for them and I understand they’re going through a very difficult time,” she said. “I don’t know the hotel business. I feel that the hotel employers should work with their hotel employees. … The other three items I totally understand.”

Shyne said that of the 22 hotels in West Hollywood, only two of them have unions to directly negotiate for fair wages.

“The hotels that don’t have unions, the workers don’t have that opportunity,” she said. “If the hotels will feel they’re going to be able to bargain by unionizing, I encourage them to look into that path.”