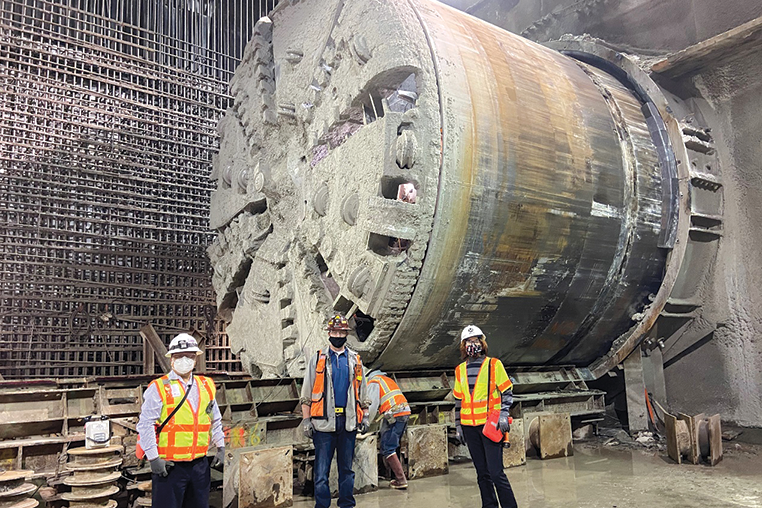 Tunneling was completed on the first phase of the subway project after the second of two machines digging west recently reached Wilshire/La Cienega. Two other tunneling machines are currently digging east toward Wilshire La/Cienega from Century City. (photo courtesy of Metro)

Metro is proceeding with work on the Purple Line Extension project in April at many locations along Wilshire Boulevard between Wilshire/Western and Century City.

At the western end of phase two of the project in Century City, ongoing station excavation is occurring after piling and decking on Constellation Boulevard was completed. The excavation will continue 24 hours until crews reach approximately 100 feet in depth, which is anticipated in the first quarter of 2022. The work will require temporary traffic lane closures on Constellation Boulevard east and west of Avenue of the Stars.

Twin tunneling machines are also making progress eastbound from Century City. The machines will tunnel under Beverly Hills for approximately two years until reaching Wilshire/La Cienega. The second of two machines that had been digging west from Wilshire/Western toward Wilshire/La Cienega recently completed tunneling on phase one of the project.

Construction continues on the future subway stations at Wilshire/Rodeo and Wilshire/La Cienega. Work at the Wilshire/La Cienega station has transitioned to the construction of appendage structures adjacent to the station box. The structures house vital systems for the future station. A series of long-term lane reductions will be in place. Wilshire Boulevard will be reduced to two lanes in each direction between San Vicente and La Cienega boulevards through fall of 2022.

Concrete and material deliveries will also continue at the future subway station sites near Wilshire/Fairfax and Wilshire La/Brea. Intermittent lane reductions on Wilshire Boulevard may be necessary and Ogden Drive will be closed intermittently south of Wilshire Boulevard.

Farther east, Wilshire Boulevard will be reduced to two lanes in each direction between Detroit and June streets through September. Hauling and deliveries to and from both La Brea Avenue staging yards will continue.

Support for underground construction also continues near Wilshire/Western. Intermittent lane closures may be necessary on Wilshire Boulevard between Western Avenue and Manhattan Place.