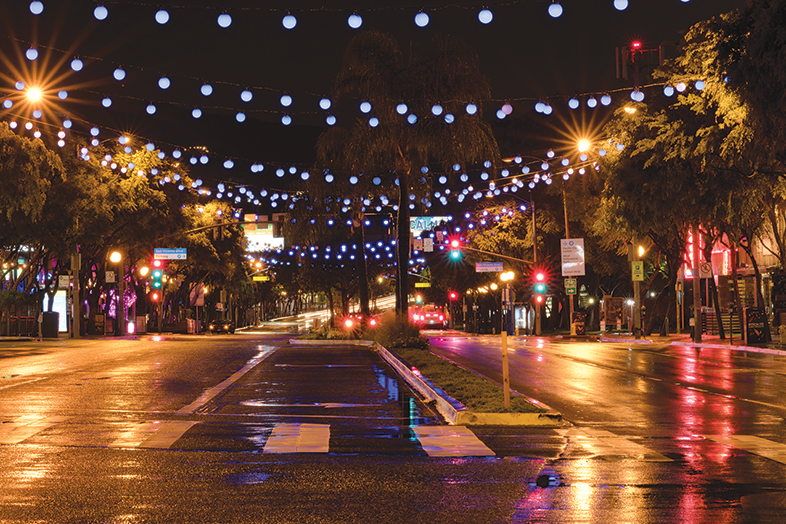 Lanterns above Santa Monica Boulevard in West Hollywood will be lit in teal in recognition of National Sexual Assault Awareness and Prevention Month. (photo courtesy of the city of West Hollywood)

The city of West Hollywood encourages members of the public to wear jeans on Denim Day on Wednesday, April 28, to raise awareness about rape and sexual assault.

West Hollywood joins communities around the world every April to recognize National Sexual Assault Awareness and Prevention Month. Denim Day was founded by the nonprofit Peace Over Violence after a 1999 court ruling in Italy in which a rape conviction was overturned based on the argument that, because the victim had been wearing tight jeans at the time of the assault, she must have been expressing consent.

The city’s Denim Day recognition is organized by the West Hollywood Public Safety Department as a way to unite against sexual assault, break the silence about sexual violence and support survivors. Staff members and West Hollywood Sheriff’s Station deputies will participate by wearing denim on Denim Day.

Additionally, in recognition of National Sexual Assault Awareness and Prevention Month, West Hollywood City Hall and the lanterns above Santa Monica Boulevard between Robertson Boulevard and Hancock Avenue will be lit in the color teal through April 30. The city will also participate in the worldwide social media effort marking events taking place across the globe as it continues to promote its ongoing sexual assault awareness campaign, Only Yes Means Yes. The program encourages people in the community to be more aware of sexual assault and promotes a message of consent. Amplify the Sexual Assault Awareness and Prevention Month message by using the hashtags #DenimDay, #OnlyYes and #Consent on social media.