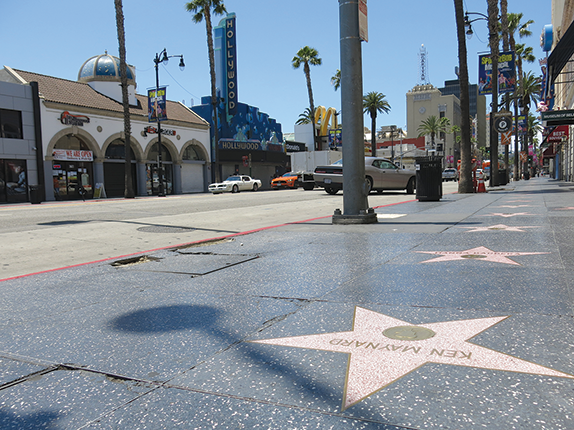 The Hollywood Walk of Fame is accepting applications for the 2022 class of awardees. (photo by Cameron Kiszla)

The Hollywood Chamber of Commerce is accepting nominations for the Hollywood Walk of Fame in 2022. Deadline for submission is noon on Friday, May 28. Nominations will be considered during the annual Walk of Fame Committee meeting in June.

“Anyone can nominate their favorite celebrity, including fans,” said Ana Martinez, producer of the Walk of Fame ceremonies. “Each year, we receive an average of 200 nominations. The Walk of Fame Committee will select an elite group of personalities to become our newest Walk of Famers and continue to help make Hollywood the most famous landmark in the world.”

For the first time since 1984, the Hollywood Chamber of Commerce will honor individuals in a Sports Entertainment category. The chamber recognizes the impact of sports entertainment and will honor individuals, not teams or sports-affiliated groups, who have made significant contributions to entertainment. The selection panel will look for nominations for individuals who demonstrate longevity of excellence within their sport, as well as broad recognition from any of the following categories: film, television, radio, live theater/performance and recording.

The criteria for receiving a Walk of Fame Star in all categories, including the new Sports Entertainment category, is based on professional achievement, longevity of five or more years in the nominee’s category and contributions to the community. A letter of agreement from the nominee or the nominee’s representation must accompany the application. Honorees selected to receive a star must confirm a ceremony date within two years from date of selection.

“We are absolutely thrilled to announce the addition of the Sports Entertainment category on the historic Hollywood Walk of Fame. For decades, this iconic landmark has celebrated the magic of Hollywood by honoring people who have made their mark in motion pictures, television, radio, recording and live theater/live performance,” said Rana Ghadban, president and CEO of the Hollywood Chamber of Commerce. “The evolution of the sports entertainment market, which now accounts for a major segment of the overall entertainment industry landscape, makes it a perfect fit for recognition on the Hollywood Walk of Fame. We feel that sports entertainers deserve the spotlight on the sidewalk and we’re certain that this decision will be very well received by their fans.”

For information and to submit a nomination, visit walkoffame.com.