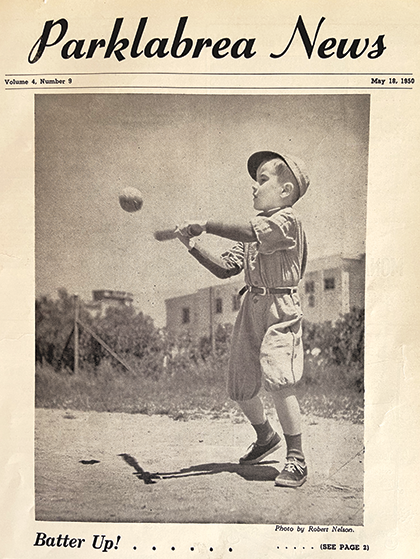 Baseball season was in full swing in this photograph in the May 18, 1950, issue of the Park Labrea News. David O’Connor, who was 5 years old and lived with his parents on Ogden Drive, was swinging for the fences on a baseball diamond at Hancock Park Elementary School. David was a fan of the Brooklyn Dodgers, which later moved in 1958 and became the Los Angeles Dodgers. The Dodgers return for the opening homestand at Dodger Stadium from April 9-11 in a three-game series vs. the Washington Nationals. The first homestand also includes three games against the Colorado Rockies from April 13-15. The Dodgers will join Major League Baseball in celebrating Jackie Robinson Day on April 15, when every player and all on-field personnel will wear Robinson’s No. 42 on their jerseys. For information and tickets, visit dodgers.com.