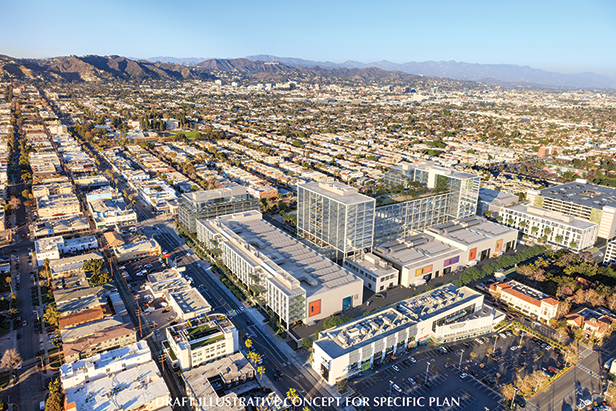 Big changes are coming to Television City in the Fairfax District.

The complex’s owners, Hackman Capital Partners, are planning to invest $1.25 billion in the facilities, upgrading them for the future of the entertainment industry.

“The investment was to take this iconic studio and reinvest in it so it could be a studio for the next 70 years just as it has for the last 70 years,” said Zach Sokoloff, vice president-asset manager for Television City.

The complex, which opened in 1952, has hosted shows like “The Price is Right” and “All in the Family,” but there were some who thought the facility might pivot to residential housing or other uses. Sokoloff said that was never the intention.

“Really since day one, our objective has been to keep this as a studio project and to modernize and reinvest in the property. That’s one of, if not the ultimate reason, that we were selected as the bidder when CBS ran a formal auction process,” he said.

Despite the intention to remain an active player in the entertainment industry, that might not be possible without some upgrades and changes to keep up with the latest production techniques, Sokoloff said.

“The newest stages on the property come from the early ‘90s, which at this point are almost 30 years old. Think of how technology has changed in the last three decades or even longer, going back to the original 1950s complex,” Sokoloff said.

The renovations, which are part of a plan called TVC 2050, will add more than 1.1 million square feet of new space, including sound stages, production office and studio office space. The new construction will also be compatible with the existing Television City, which was declared a historic-cultural monument by the Los Angeles City Council in 2018.

The renovations will help the local Fairfax area and Los Angeles, Sokoloff said, as it will help keep entertainment industry jobs in the area and provide new jobs. Hackman Capital Partners estimates that the project will generate more than 4,200 jobs during construction and nearly 19,000 jobs in Los Angeles County once operational.

“If shows are being lured to other states with modern, purpose-built stages and tax credits, we have to remain competitive to keep productions here,” Sokoloff said. “I think productions want to stay in L.A.”

“We invested in the hometown industry so it not only returns to its pre-COVID status, but exceeds it in terms of its position as a market of global production, keeping up with other competitor geographies that are really fighting to bring production and talent to their neck of the woods,” he said.

“One of the realities of working in the entertainment industry is if you work this nomadic life where you go away for months at a time, it’s a strain on people’s families and lifestyle,” Sokoloff said. “There’s something meaningful about doing your job and at the end of the day coming home and seeing your family and sleeping in your own bed. Investing in the entertainment industry here in Los Angeles is going to be really meaningful for people who are going to remain employed here in L.A.”

The project will also allow Television City to continue and potentially expand its Changing Lenses initiative, a $2 million pledge to invest in the nearby Fairfax District after the unrest of last year. Highlights of Changing Lenses include a partnership with Streetlights, a program that connects people from disadvantaged communities to create diversity in the entertainment industry, and a mentorship program for high school students with the assistance of Good City Mentors.

“Now, I think we’re keeping an eye on how do we expand this, how to bring in the partners we work with so this expands beyond Television City and Hackman Capital Partners and the people we convene to include the broader business community in the city and even the state, for that matter. [We want to add] folks to our roster of partners so that we can continue to serve more and more individuals who are interested in pursuing a career in the entertainment industry and connect them with mentorship training and, ultimately, job opportunities to pursue their passion,” Sokoloff said.

The TVC 2050 plan will need approval from the Los Angeles City Council and will require an environmental impact report.

A spokesman for Los Angeles City Councilwoman Nithya Raman, 4th District, did not return requests for comment before press time.