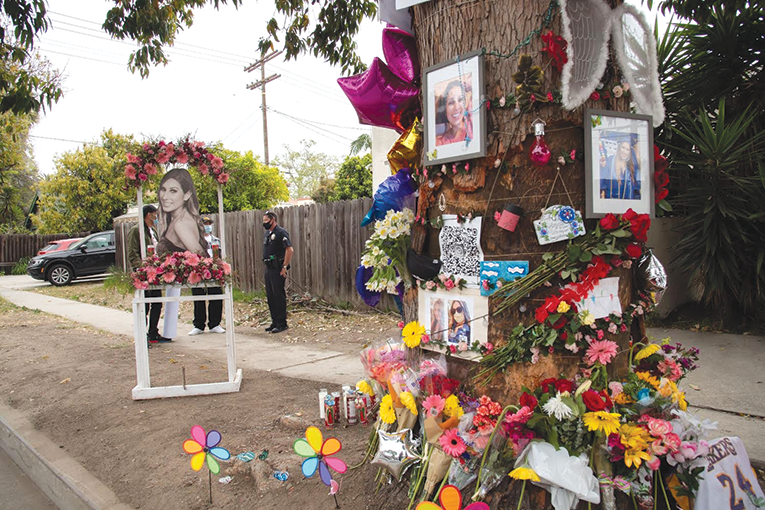 A memorial remains near Olympic Boulevard and Overland Avenue for Monique Munoz, who was killed in a collision in February. (photo courtesy of the 5th District council office)

The Los Angeles County District Attorney’s Office announced that charges were filed on April 12 against a Beverly Hills teen accused of causing a collision on Feb. 17 in West Los Angeles that claimed the life of a 32-year-old woman.

The district attorney’s office did not name the defendant because he is a juvenile and did not announce what charges he faces because it is not allowed by law, spokesman Ricardo Santiago said in a statement.

“We have concluded our review of this case and filed charges based on the evidence and the law,” the statement read. “Arraignment is scheduled for April 23, 2021, in Juvenile Court in Inglewood. Because this case involves juvenile proceedings, we are legally barred from disclosing any further information at this time.”

The teen driver who allegedly caused the collision near Olympic Boulevard and Overland Avenue has been identified in media reports as Brendan Khuri. Police allege he was driving a Lamborghini SUV at a high rate of speed when the vehicle collided with a Lexus sedan driven by Monique Munoz, 32, who died at the scene. The teen driver was hospitalized on the night of the collision, and police later arrested and booked him for vehicular manslaughter. Because the defendant is a juvenile, he was allowed to remain in the custody of his parents.

On April 12, Los Angeles City Councilman Paul Koretz, 5th District, joined officials from the Los Angeles Department of Transportation and community members at Olympic Boulevard and Overland Avenue to unveil a new signal with a dedicated left turn arrow. The new signal had been planned for the intersection prior to the fatal collision and there is no evidence it would have prevented it, but Koretz said he helped expedite the installation and hopes it will help improve safety in the future.

“The death of Monique was a terrible tragedy, and it’s unfortunate because we have been working on steps to address things like this speeding epidemic,” Koretz said. “It has placed more of a focus on the issue.”

Koretz said the city of Los Angeles is currently working with state legislators to get a law passed that will allow for the use of cameras that document speeding and enable citations to be issued to drivers. The city formerly had red light cameras at some intersections that cited drivers, but Koretz said those didn’t stop people from speeding. The city removed the red light cameras because new technology came along that allowed for traffic signals to be better synchronized and lights to stay red in both directions for longer, reducing the number of collisions caused by running red lights, Koretz said. The city also determined that citations issued by the red light cameras were unenforceable. Koretz added that more red lights at crosswalks and other locations mid-block are another option the city is considering to reduce speeding.

“With the red light cameras, we were able to replace them with changes to the synchronization of the lights, and it’s now much less likely that people will be injured as a result of people running a red light,” Koretz said. “But speeding is another story. We are looking at things the city can do, like more speed feedback signs and more red lights that bring people to a stop in areas where speeding occurs. We are looking at every step that can be implemented, and we were able to get this left turn arrow installed more quickly after this terrible tragedy.”