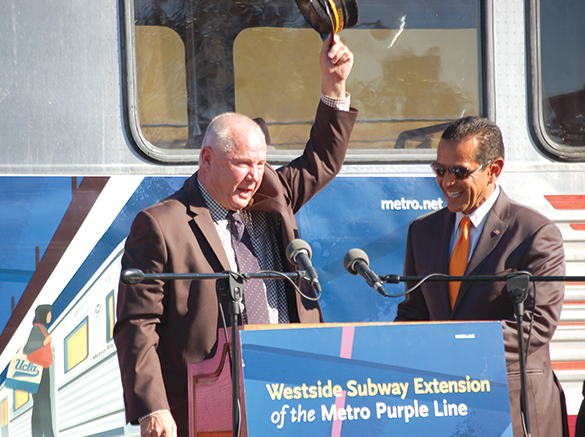 Former Los Angeles City Councilman Tom LaBonge, who died on Jan. 7, has been memorialized by having a peak above Griffith Park named after him and a hot dog at Pink’s Hot Dogs created in his honor.

The next tribute may be at the future Wilshire/La Brea subway station on Metro’s Purple Line Extension project. The Metro Board of Directors is considering dedicating the station in honor of LaBonge, who represented the Los Angeles City Council’s 4th District from 2001-15 and was an ardent supporter of the subway project under Wilshire Boulevard. The proposal was first made in January by Metro Board Member and Los Angeles Mayor Eric Garcetti and fellow board members, Los Angeles County Supervisors Sheila Kuehl, 3rd District; Janice Hahn, 4th District; and Hilda Solis, 1st District. Metro will update its board with additional details on its plans this month.

“Tom LaBonge was Mr. Los Angeles. He loved this city, devoted his life and career to its people and served its future with unbridled joy, passion, energy, affection and love. When it came to Metro, Tom was also a visionary, a leader who saw the power of our transit network to connect our communities, strengthen our workers and build up our economy,” Garcetti said in a statement. “Back in February 2005, as a member of the Metro board, he authored the motion to restart planning on the long-stalled Wilshire subway at a time when L.A. had all but given up on a westside extension. Nobody was a greater champion or cheerleader for Los Angeles, and there’s no better way to honor his legacy than to attach his name to this station.”

Specific plans for the tribute are pending, but may include a plaque or signage in honor of LaBonge, Metro spokesman Dave Sotero said. There would also likely be a public unveiling ceremony, he added. Metro policy allows board members to bestow a special honor for an individual at a subway station, but the station itself would not be officially renamed. It will still be referred to as the Wilshire/La Brea station on Metro maps and materials, Sotero said.  Section one of the Purple Line Extension, which includes the Wilshire/La Brea, Wilshire/Fairfax and Wilshire/La Cienega subway stations, is expected to be completed in 2023.

Other community leaders and public officials, many of whom worked with LaBonge over the years, said recognition at the Wilshire/La Brea subway station would be a fitting tribute.

“Nobody was more excited about showing up for work and working on transportation issues than Tom LaBonge, and it wasn’t just for residents of Los Angeles,” said Hahn, who formerly served on the Los Angeles City Council with LaBonge. “Tom wanted every visitor who came through LAX to be able to use public transit to explore this great city, have a great experience and come to love Los Angeles just as much as he did. This dedication is a fitting tribute to my friend, Mr. Los Angeles.”

“I’m extremely happy that the Metro Board [is seeking to honor] our beloved late Councilman Tom LaBonge. Among so many other accomplishments, he served on the Metro board and was a big supporter of the Purple Line,” Kuehl said. “[It will] honor his life of public service and his unflagging commitment to rebuilding public transportation in Los Angeles.”

Steve Kramer, president of the Greater Miracle Mile Chamber of Commerce, agreed that LaBonge should be memorialized at the subway station.

“I think with Tom’s decades of support for the Metro line and as well as his service on the MTA board for years, it would be a fitting honor,” Kramer said.

LaBonge’s widow, Brigid, said her husband would have been proud of such an honor.

“I think it’s so great because Tom always wanted the line to go farther, all the way through Beverly Hills and the cities beyond that. He was a longtime supporter of reducing traffic and having better transportation,” Brigid LaBonge added. “He knew what bringing the subway along Wilshire Boulevard would do to keep people moving. He was a cheerleader because he loved the city, but he also worked on a lot of things behind the scenes to make the city a better place. He thought about this stuff day and night.”

This article was updated at 4:43 p.m. on April 9 to reflect new information from Metro.