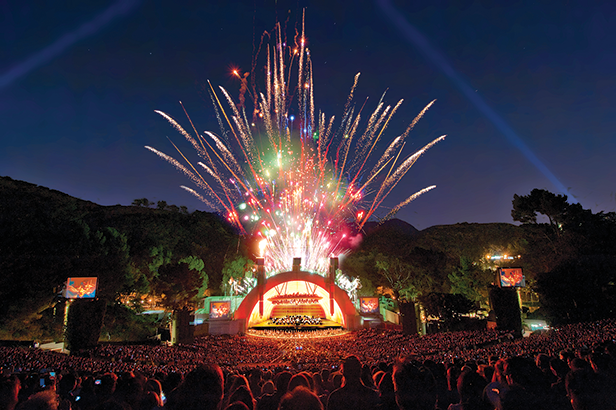 The first four shows at the Hollywood Bowl this summer will be for health care, essential and frontline workers. (photo by Adam Latham/courtesy of LA Phil)

After a 2020 mostly devoid of concerts and in-person performances, Angelenos are itching to return to the area’s famed venues, and a couple of the city’s biggest and most revered stages will soon be hosting thrilling shows once again.

On April 9, the Los Angeles Philharmonic Association announced the Hollywood Bowl and the Ford will host concerts this summer.

Laura Connelly, vice president and general manager of the Hollywood Bowl, said last year’s canceled season was “heartbreaking,” though they received an “outpouring of love for the venue from the community.” Now that the reopening has been announced, their “phones have been blowing up,” she said.

“Patrons have been very excited, wanting to know how they can get tickets, when the shows are going to start. We’re going to announce on May 11 on our website and May 25 for the Ford with all those details,” she said.

While the full summer lineup for the general public has yet to be released, the LA Phil has announced that beginning in May, there will be four free shows for frontline, essential and health care workers, featuring the LA Phil with Gustavo Dudamel, Thundercat and Flying Lotus, and La Santa Cecilia.

“We wanted to have our very first concerts being a giving-back moment. The frontline and essential workers and health care staff have been incredible this whole year, and we want to thank them, and this is the best way we know how,” Connelly said.

When the full lineup for the Hollywood Bowl is announced next month, Connelly said Angelenos should expect 35 to 50 shows over a 14-week period that “won’t look like a normal season,” when different days are devoted to specific genres.

“We’re going to mix it up a little bit and get opportunistic about where we book people and put a season together,” she said.

Connelly said just as the public has been excited, so too are artists, who have had their “agents and managers calling us as well.”

“This pandemic has been really hard on artists,” she said. “Many of them have been out of work for a year or more. Unless they’ve been able to monetize streaming, it’s been incredibly hard for them. They want to work. They’re eager to get back to work and we’re eager to get them back to work.”

While everyone is enthusiastic about returning to in-person shows, safety will still be a priority. The venues will be enforcing social distancing, requiring masks, sanitizing restrooms regularly and following all other Los Angeles County guidelines. Once they’re established, specifics will be posted on the website and on signs at the venue. If the state deviates from its plan to reopen on June 15, the LA Phil will adapt, Connelly said.

“As things evolve, we will evolve as well,” she said.

“The Bowl attracts hundreds of thousands of people annually which drive sales in the community, fill hotel rooms and create spinoff activity and enjoyment at the district’s restaurants, shops and other attractions,” he said. “As important, the reopening provides a psychological cue to the community that it’s safer now to come out of our pandemic shells and enjoy that which is great about L.A.”

Connelly said she’s expecting the first few concerts at the Bowl to be “an incredible moment.”

“There’s pent-up demand for everybody to get back to some sense of normalcy and connect with people, and coming to the Hollywood Bowl and experiencing live music is one very Southern California summer tradition,” she said. “We can’t wait to get back to what we love and do what we do best.”

Join first responders and learn about Just in Case BH