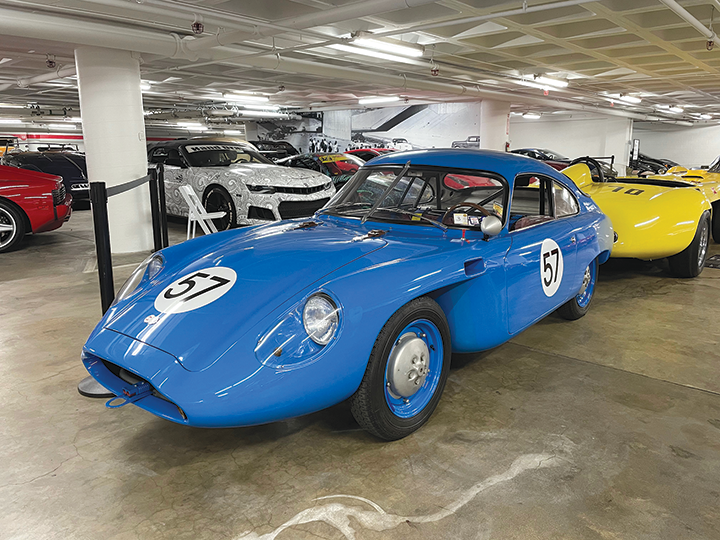 A 1959 Deutsch-Bonnet HBR5 Coupé is included in the updated tour of The Vault presented by Hagerty. (photo courtesy of the Petersen Automotive Museum)

“During the closure, our team continued to curate our collection and build exhibits to tell new stories about the automobile and appeal to a wide range of enthusiasts,” Petersen Automotive Museum Executive Director Terry L. Karges said. “We are excited to be open again and are committed to providing a more intimate and safer place for our guests to gather.”

In addition to the eight vehicles, the museum has recently debuted four new exhibits. “The Aesthetic of Motoring: 90 Years of Pininfarina” showcases the diversity and versatility of the Italian coachbuilder’s designs through four milestone examples. “Supercars: A Century of Spectacle and Speed” explores the evolution of the supercar. “Extreme Conditions” highlights 11 custom competition, recreational and utilitarian off-roading vehicles. “Redefining Performance” features some of Porsche’s most innovative road and race vehicles.

The Petersen Automotive Museum reopened to the public on March 25. Tickets must be purchased in advance and guests are required to wear masks. The museum is offering verified healthcare workers and first responders complimentary admission for themselves and up to three immediate family members for the rest of 2021.

The Petersen Automotive Museum is located at 6060 Wilshire Blvd. For information, visit petersen.org.