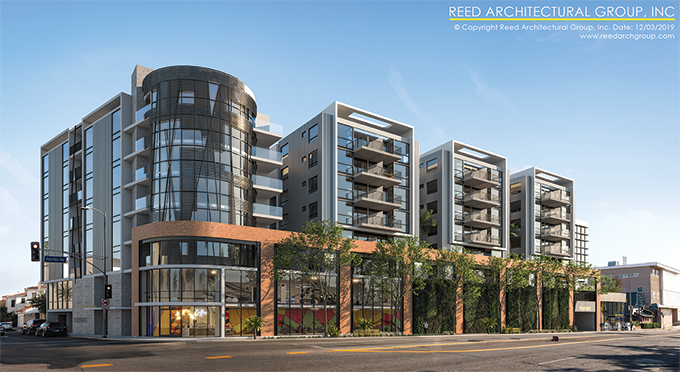 Last month, the Los Angeles Department of City Planning released an environmental assessment for the project, located at 800-840 S. Fairfax Ave., that aims to include 209 apartments – including 28 for extremely low-income households – and more than 2,600 square feet of commercial space in an eight-story building.

Adam Englander, a spokesman for the project, which will receive some benefits in the approval process because it’s located near the Purple Line Extension’s Wilshire/Fairfax station that is currently under construction, said it’s “exactly what transit-oriented development should be.”

“It’s going to be walkable from business centers, walkable from new subway lines and providing much needed affordable and rent-controlled housing near these hubs,” Englander said.

Some critics of the project, however, take issue with the building’s eight-story height.

“The scale of the project is outside what our neighborhood needs and requires,” said Greg Goldin, president of the Miracle Mile Residential Association. “These will simply be luxury units that will do nothing to address the overall housing crisis in L.A. It will be just another profitable investment for a developer. On those grounds, we’re not happy.”

Goldin also said the MMRA supports “the tenants in the existing buildings,” a complex known as Fairfax Gardens, who will likely be evicted once the pandemic-related eviction moratoriums end to make way for the construction.

The evictions have not yet begun due to the moratoriums, and Englander did not have a timeframe on when that will begin. He argued that while the rent has not been decided, rent increases will be limited because the new structure is replacing a rent-stabilized building, creating more affordable housing for the community. He added that the project will also benefit the community by preserving and improving Tom Bergin’s.

“This is really the type of project that Los Angeles needs if we’re going to come anywhere close to fixing our housing problem,” he said.

Louise Myers, 94, who’s lived in the existing buildings “for more than half my life,” said the current apartment complex is “kind of quiet,” with only a handful of tenants left in each building. Myers said some tenants have taken cash-for-keys arrangements, agreeing to move out for a fee, and the developers have offered to help the tenants find new apartments.

“When this all started, they offered me an apartment, but I didn’t take it. Who knows how long I’ll get, even after they tell us it’s going to happen? It may be about a year,” Myers said.

Another longtime tenant, Annmarie Hehir, said because she’s lived in a rent-stabilized unit for nearly 20 years, “I’m able to live in a wonderful neighborhood like the Miracle Mile.”

“I wouldn’t be able to afford to live here if I were paying market rate,” she said.

Hehir said all the tenants know for sure is that currently, the evictions are on hold, though they may resume once the eviction moratoriums are lifted – potentially as soon as June.

“I’m very worried about losing my home,” she said. “I’m assuming that I’m going to lose my home. This is Los Angeles, developers get pretty much whatever they want, but there’s a possibility we could get some say in how we exit this building.”

While they’re waiting for more information from the landlords, the tenants are enjoying the time they have left in the building, Myers said.

“I just can’t imagine being any place but here,” she said.

Jesse Zwick, spokesman for City Councilwoman Nithya Raman, 4th District, said in a statement that the council office is “invested in the ongoing work of the Fairfax Gardens Tenants Association, the Mid City West Community Council and the previous CD4 office to support the existing tenants at risk of displacement.”

“We are working to support the tenants at Fairfax Gardens in securing the strongest protections possible within our city’s current legal framework, while simultaneously advocating to strengthen tenants rights citywide through a new anti-harassment ordinance and a universal right of return policy that affords all tenants displaced by development the right to a comparable unit at an affordable price in the new building,” the statement read.