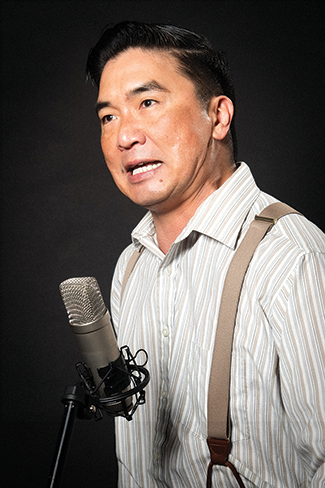 The LATW-commissioned world premiere of “For Us All,” by Jeanne Sakata, and “No-No Boy,” by Ken Narasaki and adapted from the novel by John Okada, are sponsored by the California Civil Liberties Public Education Program. Each of the plays features a large ensemble cast with several members appearing in both productions. Each playwright is also featured in their play and both productions are directed by Anna Lyse Erikson.

“In For Us All” focuses on an experienced civil rights lawyer who teams with a group of young Japanese-American attorneys to use a little known legal writ to overturn the convictions of men unjustly sentenced for resisting the Japanese-American internment. While the government tries to make the case go away, the lawyers and their defendant, Fred Korematsu (Greg Watanabe) insist on nothing short of justice. The cast also includes Edward Asner, Brooke Ishibashi, Tess Lina, Mike McShane, Derek Mio, Joy Osmanski, André Sogliuzzo, Josh Stamberg and Paul Yen, as well as playwright Sakata.

“No-No Boy” is set during the aftermath of the U.S. government’s incarceration of 120,000 people of Japanese descent during World War II. Watanabe stars as Ichiro, who returns to Seattle and finds it difficult to transition to post-war life. The cast also includes Sab Shimono, Sharon Omi, Emily Kuroda and Kurt Kanazawa, as well as Osmanski, Yen and playwright Narasaki in multiple roles.

Tickets are $20 for each production, in advance of their May 5 release date. Purchase of “For Us All” also includes access to a bonus Zoom interview hosted by L.A. Theatre Works producing artistic director Susan Loewenberg and Sakata, in conversation with Peter Irons, Dale Minami, Don Tamaki and Lori Bannai, the actual attorneys who worked on the Korematsu case.