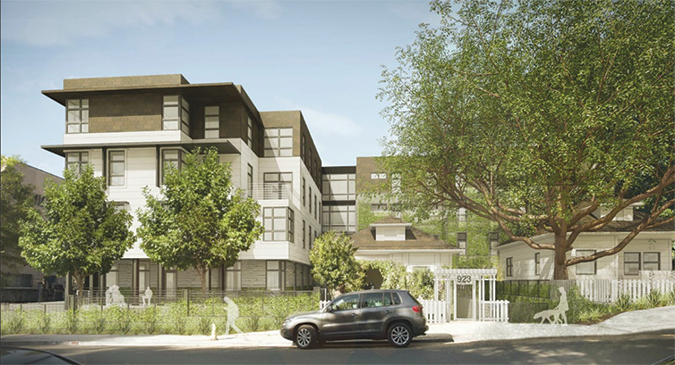 A proposed senior congregate housing facility project on Palm Avenue will continue to move forward after the West Hollywood City Council denied an appeal from neighborhood residents. (photo courtesy of the city of West Hollywood)

The West Hollywood City Council narrowly voted this month to deny an appeal from neighbors to halt a long-proposed senior congregate housing and rehabilitation facility, after the neighbors had argued the city’s Planning Commission incorrectly approved the project on Palm Avenue.

After three hours of arguments, public comment and discussion, the City Council voted 3-2 during the April 19 meeting to uphold the commission’s approval, with the majority of the council saying the appellants – who labeled themselves as the Friends of Palm Avenue – did not provide enough information to show that the commission made any errors, despite acknowledging longstanding concerns about the project.

“I think what we’re looking at tonight is an attempt to do something that really hasn’t been done in the city, and I think it would have been preferred for us to have something more specific in our code to more clearly define what this use is and how it works in our city, perhaps,” Mayor Lindsey Horvath said. “… What’s before us is not a full reevaluation of the project but rather an evaluation of the appeal of the Planning Commission’s decision. I think based on what was presented to us tonight and with the evaluation by our staff, including our legal staff, I don’t think that the appeal meets the threshold for us to uphold the appeal and deny the project.”

“From our perspective, it’s not our job to stand in the seat of a planning commissioner,” Councilwoman Sepi Shyne said. “Although I’m concerned that these aren’t going to have affordability in them … For me there isn’t enough evidence presented that is strong enough to deny this appeal.”

Councilman John D’Amico, who voted in favor of the appeal, said he felt the project, which includes the restoration of two bungalows the city has deemed historic, does not do enough to quell neighbors’ concerns about the size and look of the project in terms of how it fits into the neighborhood.

“After six years to come to this point where more than 100 residents are against a good idea, you’ve really done something wrong,” D’Amico said. “This is a fantastic idea and it’s terrible (that it doesn’t have public support). I can’t support this.”

For more than three years, Levin-Morris Architects has been working through the city process on the project, which would construct a new four-story, 33,460-square-foot senior congregate care housing facility with an underground parking garage in the 900 block of Palm Avenue. The project would preserve the two bungalows, one to be used as an entry facility, with the other as a self-contained unit, for a total of 49 units on the site. The garage was possible due to a senior housing density bonus.

The project was initially brought to the city’s Historic Preservation Commission in 2017, which expressed concern about the size, massing and spatial relationship of the development, in terms of how it fit in with the residential neighborhood, as well as with the bungalows. The project was updated and returned to the commission, which voted 3-3 on whether to approve it. That means it went forward to the city’s Planning Commission without a recommendation for approval from the Historic Preservation Commission.

The Planning Commission voted 5-1 in favor of the project in November. That decision prompted the appeal from neighbors, who argued the decision was made “based on technical errors or errors of fact, inaccurate or unsupported findings, inadequate conditions, and new information obtained by the appellant,” according to city staff.

Many of those arguments were presented by Friends of Palm Avenue during the April meeting’s public hearing, during which the group argued the project does not adhere to Secretary of Interior standards regarding historic preservation, a study regarding the effects to the surrounding neighborhood was incomplete and the project does not adhere to city’s goal to protect rent-stabilized housing.

“These kinds of short-sighted, micro-scaled analysis and recommendations got us here,” said Dee Roberts, a community organizer and member of the group. “This development is not by right, it’s by discretion. … This is an abuse of discretion.”

Victor Omelczenko, another community organizer and member of the group, said that in addition to the project “looming” over the historic bungalows, it contributes to ongoing issues regarding rising rents and evictions.

“Will these 49 units contribute to our regional needs assessment to meet the housing crisis in this city?” he said.

Ed Levin, the architect of the project and member of the Historic Preservation Commission, who recused himself from that commission’s votes, said during the meeting that “the evidence in the record overwhelmingly weighed in favor of approving the project.” He also argued it falls in line with the city’s Aging in Place plans regarding older residents.

“That approval was made legally and properly, and nothing you’ve heard tonight changes that,” he said. “As a legal matter, the appeal is about only one question: Did the Planning Commission make factual, technical or legal errors when they approved the project? In this case, the answer to that is ‘No.’ The approval was properly made.”

Dozens of neighbors spoke during public comment, the majority of whom were opposed due to its size and potential traffic on the street, with some disagreeing whether the project does enough for residents to age in place. The appeal also received a letter of support from the West Hollywood Preservation Alliance, emphasizing the proposed development didn’t meet the Secretary of Interior standards regarding protecting the integrity of historic buildings.

“The WHPA asks that you support the appeal of the Friends of Palm Avenue (FOPA) and deny the proposed project because of its massing and height, its look and feel, and its impact on designated cultural resources,” the letter read. 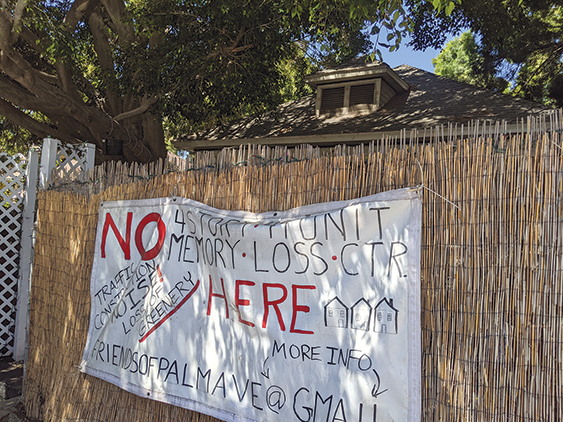 The Palm Avenue project would preserve two bungalows deemed historic by the city, with one being turned into a residential unit and the other being used as an entrance and exit facility for the property. (photo by Justin Sayers)

But others spoke in support of the project, arguing there has been a wealth of misinformation spread regarding what the facility will actually provide.

“The city of West Hollywood is known for supporting the needs for housing and supporting services,” resident Manny Rodriguez said. “That is what assisted living does. Under the circumstances, every city and community in L.A. County would welcome this development. Let’s not be the one community to reject the project that would actually help people.”

Antonio Castillo, a senior planner for the city, said city staff reviewed the appeal and found the project will provide necessary support and housing for senior citizens, including those with special memory care needs.

“Staff reviewed all the contentions in the appeal,” Castillo said. “As detailed in the staff report, staff found that the appellant did not provide any new evidence or documentations of error, or otherwise identified and supported findings substantiating the basis for the appeal.”

Despite the recommendation, two council members – Lauren Meister and D’Amico – voted in favor of the appeal.

Meister said she found merit in the appeal, as she argued the developers’ description of what the facility actually does has changed throughout the public process in order to get it approved. Many of the units are labeled as dwellings but don’t have in-unit kitchens.

“I agree that different types of housing are necessary in this city, but it is our job to decide where projects are and when they don’t make sense,” she said.

Councilman John Erickson, who was a member of the Planning Commission prior to joining the council, said he understands and hears the neighbors’ concerns, but said he doesn’t want to relitigate the commission’s decision. He also accused the appeal of being sloppy, due to typographical errors and lack of new information.

“Almost every other response back from staff for the appeal is saying no additional evidence was provided to support this claim or this claim was not supported in any way shape or form and that is based on fact,” he said.