New Metro CEO has bold plans for the future 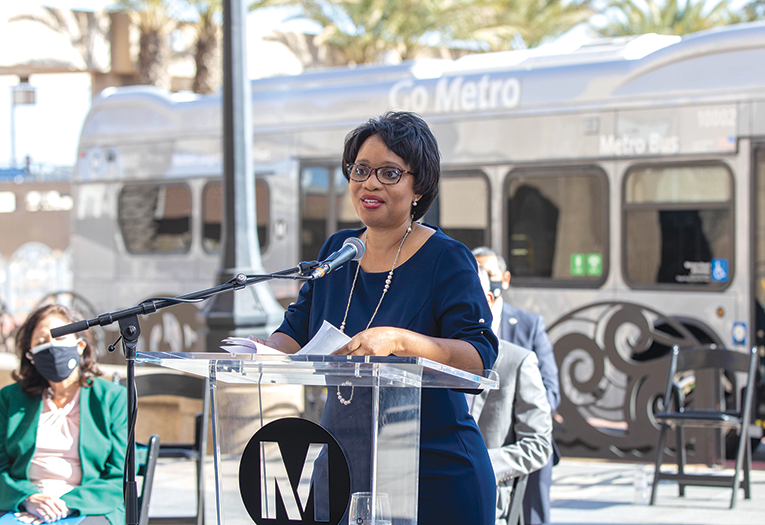 Stephanie Wiggins, who currently serves as CEO for Metrolink, will be the next CEO for Metro. She replaces Phillip A. Washington, who is retiring in May. (photo courtesy of Metro)

Los Angeles Mayor and Metro Board Chairman Eric Garcetti announced the appointment of Stephanie Wiggins as Metro’s chief executive officer. Wiggins, who is currently CEO of Metrolink, will be the first woman and first Black woman to serve as Metro CEO. She will succeed retiring CEO Phillip A. Washington, who is leaving the agency in May.

“Metro is in the midst of a generational transformation that will mean more jobs for local workers, more growth for our economy and more ways for Angelenos to move around our region, and nobody is better prepared to carry the torch of progress than Stephanie Wiggins,” Garcetti said. “Stephanie’s career makes her ideally suited to lead this agency at this moment. She’s experienced, determined, committed to equity and steeped in L.A.’s transportation history, and she is the perfect candidate to carry Metro into its next chapter.”

Wiggins will manage a budget of nearly $7 billion, oversee up to $20 billion in capital construction projects and oversee an agency with 11,000 employees that transports more than a half-million passengers daily on a fleet of 2,200 buses and six rail lines. Wiggins started her tenure as CEO of Metrolink in December 2018, directing an agency that operates a regional passenger rail network across a six-county, 538 route-mile system. Prior to taking that post, Wiggins served as deputy CEO of Metro, where she helped advance the agency’s primary objectives, including the implementation of projects made possible by Measure M.

“I am honored by the opportunity to return to L.A. Metro as its CEO and am grateful to Mayor Garcetti and the L.A. Metro Board for the faith they have placed in me for this important role,” Wiggins said. “I am thankful to my team at Metrolink for all of our successes together and those that are still to come throughout this transition and as we work together in the future. L.A. County has great mobility needs that we must develop with goals of achieving better health, opportunity and equity for all of the region’s residents, and I look forward to bringing transformative leadership and collaboration with the region’s transportation authorities to make this vision a reality.”

“I have worked closely with Stephanie for many years and she has earned my trust and respect with her leadership, intellect and dedication to mobility and to the people of Los Angeles County and Southern California,” Washington added. “I am thrilled with the Metro Board’s selection, and I know Stephanie is the right person to lead the agency into the future.”

Join first responders and learn about Just in Case BH