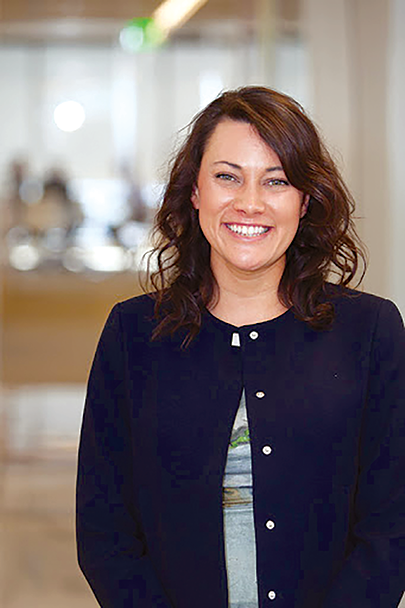 Lauren Nichols, who works with foster youth for the Anthony and Jeanne Pritzker Family Foundation, was elected new chair of the Mid City West Council. (photo courtesy of Lauren Nichols)

She opted to run and won a seat, and what she found was an experience “so, so cool” – whether it was beautifying areas near Fairfax High School, handing out grants to nonprofits or helping bring slow streets to the area near her Fairfax apartment.

Fast forward three years and Nichols, a business representative on the council, former vice chair and philanthropy professional, was elected as the replacement for longtime chair Scott Epstein, who is running for Los Angeles City Council, during the council’s April 13 meeting.

“It wasn’t something I necessarily sought out to do,” Nichols said. “[The council] is just really empowering. As much as you want to do, you have a platform to do that.”

Epstein said Nichols is “going to be an amazing chairperson for Mid City West.”

“She is passionate about community engagement. She is committed to lifting up diverse voices,” Epstein said. “Everything she does she brings great thoughtfulness and attention. I think she’s going to set a very constructive and receptive tone for the board.”

Nichols, who works professionally helping administer grants for foster youth for the Anthony and Jeanne Pritzker Family Foundation, said her main goal as chair is to provide those in the neighborhood the same feelings of empowerment she’s experienced.

For her, that first moment came when she was a stakeholder in the council’s education and social services committee. She participated in a homeless count, with a number of volunteers she called “scrappy,” and loved how she felt she was making a difference. That experience prompted her to reach out to Epstein about getting more involved.

She was elevated to serve as the secretary for the council’s transportation committee, where she worked to implement the Slow Streets program. She later was elected first vice chair, while also chairing the neighborhood’s grant committee, helping give out $10,000 in grants – roughly 25% of the council’s budget – to support area nonprofits and schools. They also used other funds to purchase toiletries and other goods to support homeless people at the Pan Pacific Park shelter.

Despite her elevation in the neighborhood council, she stressed that she doesn’t have her own political ambitions, but is just “so energized by doing the work.”

“What’s so great about this is it gives us a platform and a modest budget to make a difference in the community,” she said.

Nichols said the best way to empower others to give them a seat at the table. That includes something as simple as getting out in the neighborhood and making people aware of what the neighborhood council is and does, but also includes building partnerships with organizations in the district, leveraging the work that they do. She said she’s hoping to get students and the youth voice more involved.

“During the pandemic, we have all gotten to know our community and neighbors in ways we never did before,” she said. “People want to do more. … There’s a real opportunity in this moment to give people the opportunity to step up.”

She said she supports keeping council meetings, which have been solely online during the pandemic, in a hybrid format – both online and potentially on-site at different community organizations – as a way to accomplish her goals.

“I think the virtual format is more accessible to people,” Nichols said. “The construction and new cultural organizations that are here are really exciting. It would be so phenomenal to use one of those fabulous venues.”

She also said that she’s going to stress the importance of the council’s social and racial justice equity committee, which was formed amid the protests last year after the murder of George Floyd by a police officer in Minnesota. That includes doing an equity audit – looking at the council from top-to-bottom to make sure they’re inclusive.

“One of the things that we have talked about in this cycle that I want to champion and bring on is really looking at ourselves as an organization moving to become actively anti-racist as an organization,” she said. “While we’re a large board and we do have diversity on the board, and I’m proud of that … We can be doing more.”

Nichols said it’s all about opportunity.

“There’s so much opportunity,” she said. “People in the community want to help and get involved. They just need the opportunity.”

For Epstein, he said that he believes bringing more voices and opportunities to the civic engagement process was one of his proudest accomplishments as chair. He said that those issues touch everything the council touches, whether it’s equity in land use, transportation and sustainability.

“Our community is not monolithic and cares about all these issues as well. I think the council is really well-positioned to be an active voice on a wide range of issues,” Epstein said. “What I’m really excited about is I think we’ve created a constructive attitude that allows space for people to do new things and to be responsive to the community. I have no regrets. I think under Lauren, things are going to be amazing.”