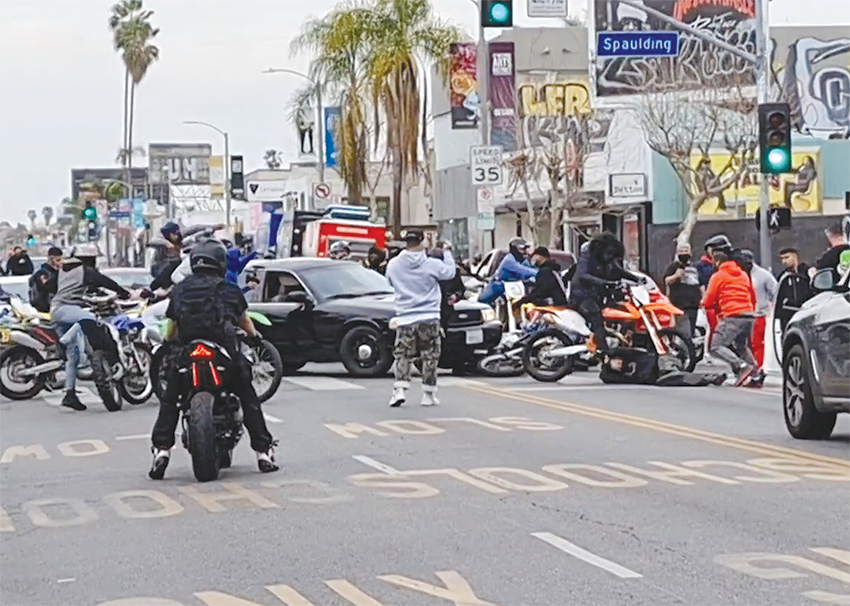 A man was assaulted by a group of motorcyclists on Melrose Avenue in March and the attack was captured on video. (photo courtesy of the Melrose Action Neighborhood Watch)

Melrose is known as a place for new trends, but some say a dangerous new development is emerging in the district. Large groups of motorcyclists spontaneously show up and block streets, ride on sidewalks, perform stunts and cause havoc, local residents claim.

The new trend is similar to car street takeovers, where drivers in high-performance vehicles show up unexpectedly and block streets and intersections. Large crowds of spectators gather and watch as the vehicles spin in circles with engines revving and tires burning rubber. Vehicles have gone out of control, hit bystanders and caused death or serious injuries, police said. Shootings and assaults have also occurred, including one last July in Hollywood that claimed the life of a 17-year-old girl.

Like car street takeovers, the motorcyclists block streets and intersections, and participants perform stunts. They arrive on everything from off-road bikes, quads and all-terrain vehicles to high-performance sport bikes, police said. The motorcycle takeovers also sometimes turn violent, including an incident in March at Melrose and Spaulding avenues when a driver who allegedly bumped his car into one of the motorcycles was pulled from his vehicle and punched and kicked by a group of motorcyclists. The assault was captured on video and posted on the Melrose Action Neighborhood Watch’s website.

“It’s like ‘Mad Max.’ I don’t know what to say,” said Peter Nichols, cofounder of the Melrose Action Neighborhood Watch. “They got into an altercation and it was violent.”

Nichols said a large number of police cars converged on the area after the assault, but the motorcyclists fled. The man who was assaulted was a private security guard who happened to be driving in the area, according to police. The motorcyclists dispersed very quickly when they heard sirens, making pursuits difficult, Nichols added.

“I think from a neighbor’s perspective, a situation like that feeds into the fears of a lawless-like atmosphere along Melrose,” he said.

Others were more blunt.

“It’s crazy,” said Irma Rodriguez, of Antonio’s Restaurant on Melrose, who added that the motorcyclists repeatedly gather in the neighborhood on weekends. “It’s a lot of little dirt bikes. They go up on the sidewalk, they do wheelies. They knocked down a clothing rack from one of the stores. It’s pandemonium.”

Rodriguez said police and the city are not doing enough to address the problem, and the takeovers are getting worse.

“It used to be around 10 or 11 (motorcycles), and you would call the cops and they would come and try to stop them,” she added. “Now, it’s rows of bikes and they come on Fridays, Saturdays and Sundays. They start passing by and going up and down the streets. It’s an accident waiting to happen.”

Capt. Brian Wendling, with the Los Angeles Police Department’s West Traffic Division, said police take the issue very seriously and are trying to proactively address street takeovers. A task force was assembled in mid-March in the LAPD’s West Bureau – which includes the Wilshire, Hollywood, Olympic, West Los Angeles and Pacific divisions – to specifically respond to street takeovers. Wendling declined to divulge tactics or how police are monitoring organizers, but he said law enforcement is poised to take action when street takeovers occur by responding in force. He encouraged people to call police immediately when a takeover occurs.

“If you see something like that, call 911. You’re going to get a massive response,” Wendling said. “We have enough resources now, and we are adjusting to their tactics. You can’t have tolerance for this. It’s very dangerous. They’ve injured people, there have been shootings and fights. We are taking a very proactive approach and there is zero tolerance.”

Wendling stressed that the task force has been impounding vehicles and making arrests, and there has been progress. He said during the first Sunday when the task force was deployed on March 14, they received multiple calls about takeovers. Last weekend, there were no reports of takeovers in the LAPD’s West Bureau, Wendling said.

“The word has gotten out that if you come to the west side and engage in that kind of activity, a lot of police are going to take action,” Wendling added. “We have sufficient resources now to deal with them. And if you see something happening, forward the information so that we can be aware and take action.”

Los Angeles City Councilman Paul Koretz, 5th District, said he is also concerned about the street takeovers and is working with law enforcement to mitigate problems. He did not return a call seeking comment, but issued a statement.

“There is no room for the mayhem on Melrose,” Koretz said. “We have been working very closely with the different agencies to assess the intel and to immediately enforce any and all infractions observed along the area from parking to public nuisance. Melrose is not the wild west. It is a business and residential district, and peace must be restored to the area, and my office is working with all agencies to do so.”