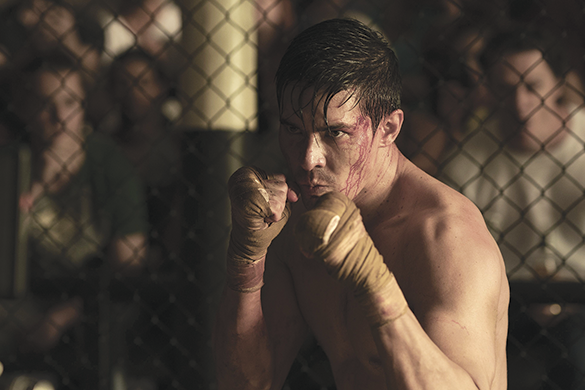 Lewis Tan, as Cole Young, is an original character in the new version of “Mortal Kombat.” (photo courtesy of Warner Bros. Pictures)

Why do I cling to hope? I should know better. I do. Movie trailers aren’t always an accurate barometer of a film’s quality. But a polished piece of marketing pulls at the cinephile within. That inaugural peek at the “Mortal Kombat” reboot fooled me.

Warner Bros. employed a clever marketing strategy to mask the film’s banality: release the best seven minutes early. It’s a solid sequence featuring warrior and family man Hanzo Hasashi (Hiroyuki Sanada) fending off ominous foe Bi-Han (Joe Taslim). They both enjoy alternate “Kombat” names, but no need for spoilers here. Both Sanada and Taslim are proven performers, the former with a career dating back the ‘60s, while Taslim rocks it in Indonesian martial arts film “The Raid: Redemption” and Netflix’s “The Night Comes for Us.”

The promise of those seven minutes fades once “Kombat” settles into a modern-day setting lathered in banal drama. Game familiars Jax (Mehcad Brooks) and Sonya Blade (Jessica McNamee) search for humans baring a mark that signifies they must compete in an ancient tournament – Mortal Kombat – that will determine the fate of Earth, or Earthrealm, to distinguish it from other planetary dimensions.

Unfortunately, humanity lost nine times in a row. One more and Outworld, ruled by Shang Tsun (Chin Han sporting a really bad wig), gains control. With less than a month until opening ceremonies, Tsun doesn’t play fair, sending his warriors to exterminate Earth’s champions before they can even compete.

Us muggles prove harder to dispatch, but that doesn’t necessarily mean victory is nigh. For starters, Cole Young (Lewis Tan), an original character here, hasn’t even unlocked his special ability, like Liu Kang’s (Ludi Lin) fire or Kung Lao’s (Max Huang) supernatural control of a sharpened metal hat. Then there’s Kano (Josh Lawson), just as obnoxious and morally bankrupt here as his 1995 counterpart.

Following the success of both “Detective Pikachu” and “Sonic the Hedgehog,” I foolishly believed a long-standing curse might lift. Perhaps the big five studios finally unlocked the secret to a well-made flick hailing from 8-bit origins. Not yet.

Mehcad Brooks stars as Jax and Joe Talsim is Sub-Zero in “Mortal Kombat,” a reboot of the 1995 film. (photo courtesy of Warner Bros. Pictures)

“Kombat” might surpass its ’95 predecessor in some ways (“Highlander’s” Christopher Lambert as Lord Raiden was certainly … a good choice), but that’s a low bar. An R rating, better graphics and a budget more than triple the original (though a fraction of your standard blockbuster) – the time should be now for top contenders of Earthrealm and Outworld to clash for the soul of the planet.

Alas, the WB doesn’t invest $55 million in a property like this – one that requires a good deal of CGI and constant action – with high hopes. Its primary strength is name recognition, which mutates into an easy target for anyone looking to hate on yet another video game adaptation.

“Kombat” is a prime example of forced nostalgia. All those familiar phrases, easter eggs, fan service to an audience some two decades later. “Fatality,” “flawless victory,” “get over here” (maybe that one works) and others grace characters’ lips, often in rather unnatural ways.

But a few winks and nods to the diehards hardly breaks a film. “Avengers assemble” didn’t make sense in “Endgame,” after all, but fans long waited for its arrival, forgiving any logical ruptures. It worked because of everything else surrounding it.

“Kombat” might be able to pull off a pandering throwback if the rest falls into place. Why? Why didn’t it all fall into place?

I continually wonder how a film like this moves through pre-production and into production unconcerned about glaring problems, like a second act entirely devoted to character development and a fast-tracked introduction of various baddies, only to discard them a scene later.

Haven’t studios learned anything from the “Fast and Furious” films? Be as dumb, over the top as you want, but take characters and plot seriously. “Kombat” goes where far too many video game flicks have gone before: brand recognition and enough enticing moments to fill a few trailers. And I fell for it – I watched.

And I’ll probably watch the next one, if god of thunder Lord Raiden (Tadanobu Asano, who also starred in another series with a thunder god, all three “Thors”) works his magic and somehow convinces a studio exec to press on. I’ve got nothing else to view, anyways.

BH’s spring art show to be held in May