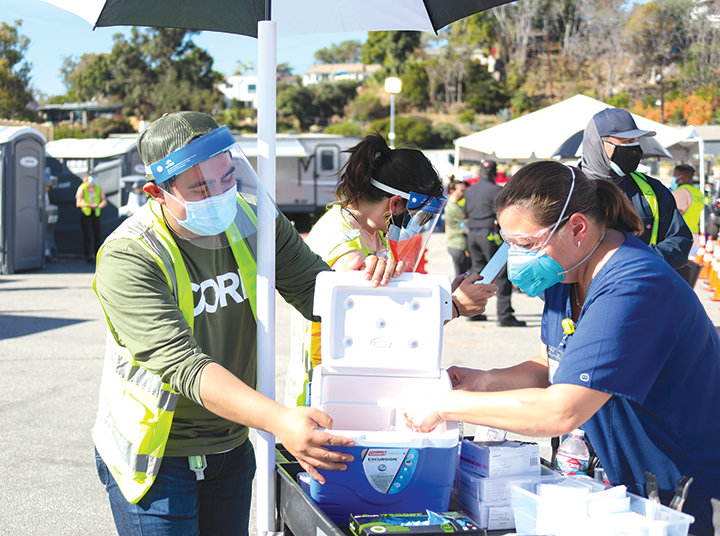 The city is maintaining its efforts to get more people vaccinated throughout Los Angeles, including at California State University, Los Angeles. (photo courtesy of Mayor Eric Garcetti’s office)

The city of Los Angeles opened vaccinations to people ages 16 and older on April 13, and people can make appointments on the city’s online portal. The eligibility expansion came as the city increased its vaccination infrastructure and assumed operations at the vaccination site at California State University, Los Angeles.

“Opening vaccine eligibility to all Angelenos who are 16 and older is a major milestone in our efforts to get more shots into more arms and defeat COVID-19 once and for all,” Los Angeles Mayor Eric Garcetti said. “We urge patience as we continue to ramp up our operations, obtain more doses and enter this new phase of our campaign to end the pandemic. But our commitment remains clear. As soon as vaccines are available, we are ready to administer them swiftly and safely.”

This week, the city expected to receive nearly 60,000 doses of the Moderna vaccine and 56,000 of the Pfizer vaccine. On April 13, Los Angeles County Health Department officials announced that it is temporarily suspending use of the Johnson & Johnson vaccine based on recommendations by the Food and Drug Administration and the Centers for Disease Control and Prevention. Those recommendations were based on reports that six women between the ages of 18 and 48 developed unusual types of blood clots six to 13 days after receiving the vaccine, county officials said. The decision was made out of an abundance of caution and the discontinuation will last until the FDA and CDC complete a review. Vaccine providers in Los Angeles County will contact patients about rescheduling or providing a new appointment for Pfizer or Moderna vaccines.

County health officials noted that the reactions are extremely rare, as nearly 7 million people have received the Johnson & Johnson vaccine in the United States to date. People who received the vaccine in the last three weeks should look for any symptoms of the unusual clots, including severe headaches, abdominal or leg pain, and shortness of breath. Contact a medical provider if symptoms develop. People who don’t have a medical provider can call 211 to be connected with care.

After the city assumed operations of the site at California State University, Los Angeles, its program has capacity to administer up to 54,000 vaccines daily. The Los Angeles Fire Department will lead operations at the site, supported by staff from Community Organized Relief Effort.

For information and to make an appointment for a first dose, visit coronavirus.lacity.org/vaxappointment.