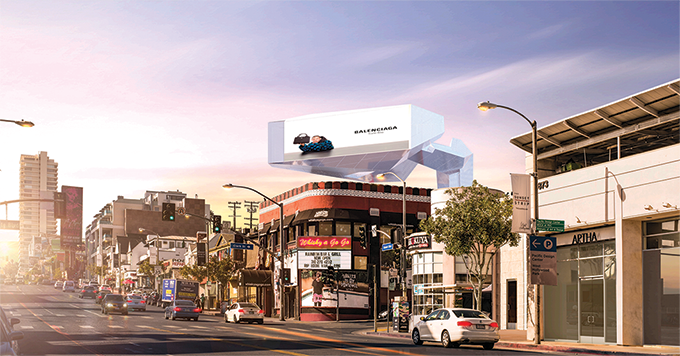 A billboard proposed to be built above the Whisky a Go Go incorporates static and digital advertisements. (rendering courtesy of the city of West Hollywood)

The West Hollywood Historic Preservation Commission approved a pair of billboard projects on April 26 that aim to add digital capabilities to existing advertising spaces on historic structures on the Sunset Strip.

The first billboard, to be built above an 83-year-old Streamline Moderne structure, the Sentney Building at 9157 Sunset Blvd., is planned to be in the same style, which is known for a “fetish of the machine and technology” as well as natural shapes, said Ben Anderson, co-founder and principal of Office Untitled, who designed the project.

“We are referencing the machine aesthetic of the materials, but the form itself is referencing the trees up and down Sunset Strip and our immediate context,” Anderson said.

The 50-foot-by-20-foot digital billboard was unanimously approved by the commission, though West Hollywood resident Lynn Russell raised issues with bringing more digital billboards to the Sunset Strip when projects like the Sunset Spectacular have rankled neighbors with claims of overly bright lights and colors that intrude on apartments at night.

“I’m requesting that the commissioners put on the brakes if they’re unsure about this project to any degree … There appears to be no community benefit,” Russell said.

Historic Preservation Commission Vice Chair Matt Dubin argued that there is indeed a community benefit, as funds from the sale of advertisements for the billboard will help support the building beneath it, which was designated as a historic resource in 2019.

“Revenue will be put back into protecting and preserving the [building]. That’s a huge benefit right there,” Dubin said.

As Jennifer Davis, senior contract planner for the city, pointed out, the new billboard also will not affect the historic structure, which contains storefront and office space, in any negative way.

“It cannot adversely affect significant features of the cultural resource … This historic building will continue to be used as it has been,” Davis said.

Additionally, the Sentney Building was declared historic with the existing 60-foot-by-20-foot static billboard already in place.

“It’s very clear the presence of a billboard, a new billboard, has no effect, because we designated the project [as historic] when there was a billboard already there,” Commissioner Edward Levin said.

A second approved billboard project for the Sunset Strip, however, did not pass unanimously, and even some commissioners who voted to send the project forward had criticisms.

The planned billboard will include digital and static portions – each of which will be 14 feet by 48 feet – as well as a 5-foot-by-14-foot capstone with digital capabilities. It was praised by Aaron Green, president of Afriat Consulting Group, who spoke on the behalf of the project, as “a very dynamic and exciting sign” that will accent the Whisky a Go Go, which is located beneath the billboard site at 8901 Sunset Blvd.

“It’s not really an addition to the Whisky. It’s a completely separate structure … It makes very clear what is historic and what is new,” added John LoCascio, principal from Historic Resource Group, who also spoke on behalf of the applicant.

As with the Sentney Building, this billboard would replace an existing billboard that was already present when the Whisky was declared a local cultural resource in 2019.

“The size and scale of the billboard will not be any different from what we have now,” LoCascio added. “The difference will be that the new billboard will have a frame [that is somewhat translucent] … It will almost disappear to a certain degree.”

The commissioners were not totally convinced by the plan. Levin disputed Green’s idea that the billboard should be “dynamic,” which Levin took to mean that the digital portions of the billboard would show animations.

“I do not believe it would be appropriate to have dynamic color change … We need to decide if we’re going to allow that or not, and I would prefer that we don’t,” Levin said.

Green said the capstone “will not include advertising.”

“We intend to use it for art and public programming,” Green said.

Levin clarified that he did not want to prohibit color changes, and dynamic programming would be allowed for art, but not for advertising.

“What I’m objecting to is that that happens dynamically, that it’s a continuous change while you’re looking at it. I have no problem with presets, like ‘It’s Pride Month, we’ll go rainbow.’ … I think it’s distracting from the resource to see that change while you watch,” Levin said.

Chair Lola Davidson pointed out that the animations could attract the attention of the youth to the historic Whisky.

“For a younger generation, perhaps that is bringing more attention to a historical site,” Davidson said.

Dubin was not convinced that the billboard would not overwhelm the Whisky, adding that he had “grave problems with this design and with the findings.”

“I don’t find this new structure subordinate to the building,” Dubin said.

Dubin was the lone vote against the project’s approval, as the other commissioners, while not fully in favor of the design, felt their issues fell outside the commission’s purview.

The billboards will next go before the West Hollywood Planning Commission.