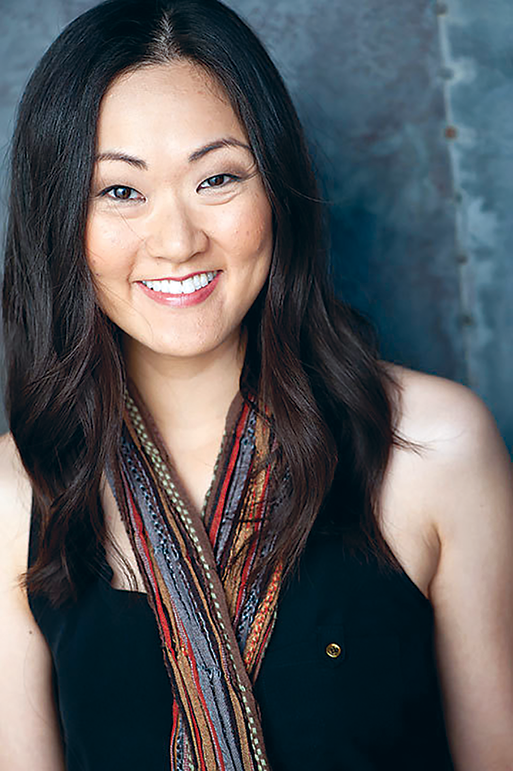 Actress Jully Lee was misidentified with a mispronunciation of her name and a picture of a fellow Asian-American actress during the annual Ovation Awards. (photo courtesy of Jully Lee)

For actress Jully Lee, her first Ovation Award nomination was supposed to mark a high point after more than a decade of performing on stages throughout Southern California.

It has instead left her sleepless and unable to eat, the unexpected – and self-described “ill-prepared” – face of a local movement to decry what many in the local theater community have described as the latest instance of long-standing racism in the industry.

During the virtual awards ceremony on March 30, Lee, who had been nominated for Featured Actress in a Play for her work in “Hannah and the Dread Gazebo,” had her name mispronounced. A picture of her fellow Asian-American co-star was shown in her place.

The backlash was swift. A day after the show, representatives from the East West Players Association, one of the nation’s largest Asian-American theater companies and co-presenter of “Hannah and the Dread Gazebo,” announced they were revoking their memberships to the L.A. Stage Alliance, which sponsors the annual awards – and asked others to do the same.

“The mispronouncing of our names combined with the sentiment that all Asians look alike is not new. However, it particularly stings when the evening is supposed to be about raising the visibility of L.A.’s theater community and celebrating our artists. It is not hard to Google Jully’s name and come up with hundreds of photos of her with her signature grace, poise and good humor all facing forward. She is a well-established actor and should be held in that regard,” the statement read.

“What the Ovation Awards cannot be bothered to do is understand that community and coalition building happens through these partnerships. You have stood behind an embarrassingly outdated policy of only recognizing one theater per production – a patently false assertion and an exclusionary situation that you have set up. Every time East West Players co-produces in an effort to bring Asian-American actors more visibility in L.A. theaters, the other, predominantly white organization is solely listed and uplifted. This is what erasure of our work and our community looks like. To the Ovation Awards and L.A. Stage Alliance, we do not exist nor does our artistic voice matter,” the statement read.

More than 25 Los Angeles-area theater companies, including Center Theatre Group and Fountain Theatre, followed. The alliance announced on April 5 that after 46 years, it was ceasing all operations.

“We have come to this conclusion with a heavy heart – our intention has always been to represent and promote the entire Los Angeles theater community, but at this time, we are unable to continue,” the alliance’s statement read. “We believe in equity, diversity and inclusion at all levels. As individuals, we are committed to continuing our support of this community which we hold so dear.”

The ordeal has been a whirlwind for Lee, who said she’s experienced the full range of emotions during the last week. There was the initial shock of the incident. Then there was the empowerment from those who stood up for her. But she’s still coming to terms with being in a position that she never expected – or wanted – to be.

“I was shocked. It was a complicated instance where a lot of emotions came into play at the same time, so no one single word can’t really describe it. I felt shocked at the same time, but not surprised,” she said.

“I feel very unequipped and ill-prepared to be in this position. I look forward to learning from my predecessors and the ones who are very local and active in the community so that I cannot waste this opportunity and platform that I’ve been given,” she added.

Lee said that she’s seen the barriers members of the Asian-American theater community face. She started acting in 2006 and realized early on that there aren’t many roles for Asian Americans in theater. That feeling was validated once while warming up for a play backstage by singing songs from “West Side Story,” when a fellow actress told her that it was a disappointment she could never play Maria.

“I started to realize that I’m probably never going to be nominated for an award, because there aren’t many roles out there to audition for,” Lee said. “It’s this notion that Asian Americans don’t get to see themselves in the practical sense with the goal of being in a certain role.”

It was those feelings that made her nomination for the Ovation Award extra rewarding. But she felt early on that things were awry, when she only found out about her nomination through social media, and was contacted just once by the alliance to film an acceptance speech – every candidate had to do one – and the correspondence didn’t include the time and date of the show.

After the misidentification, she said her phone “blew up” immediately – and hasn’t stopped. She’s been on the phone since, and said it’s completely consumed her, even if the messages have been overwhelmingly positive.

“I’ve felt a tremendous amount of pressure to address every message, every comment that was made in support of me and the theater community,” Lee said.

That support has been evident in the statements released by some of the highest-profile and diverse theater companies in the region, including Geffen Playhouse, Latino Theatre Company and Playwrights’ Arena.

“The Fountain Theatre stands in solidarity with actress Jully Lee, our colleague East West Players, and our sisters and brothers in the Los Angeles theater community by withholding our membership to L.A. Stage Alliance until it rebuilds its organization to better serve and advocate for all L.A. theater artists and companies,” read a statement from the Fountain Theatre, which co-presented “Hannah and the Dread Gazebo.”

“We stand with East West Players’ decision to revoke their membership to the L.A. Stage Alliance, following [the] Ovation Awards ceremony, and are revoking our own,” read a statement by Center Theatre Group. “We have always believed that Los Angeles benefits from having a strong local organization that advocates and celebrates the art, artists, audiences and diverse voices of this vibrant community.”

The stage alliance initially responded to the outrage by apologizing to Lee both publicly and privately, and vowing to create a task force and advisory board to better address issues of diversity in the theater community. The alliance later announced their decision to disband.

“We’ve had many challenges like many other organizations and at this time we are unable to continue,” the statement read. “We wish the entire theatre community and stakeholders success. As individuals, we are committed to continuing our support of this community which we hold dear.”

Lee said she doesn’t have enough information to weigh in on the decision, but one thing she’s learned in hearing from members of the stage community is concern exists about issues of marginalized performers.

Lee said she is still coming to terms with being the face of it.

“It’s really unfair to pin it on me,” she added. “This has been a long time coming.”