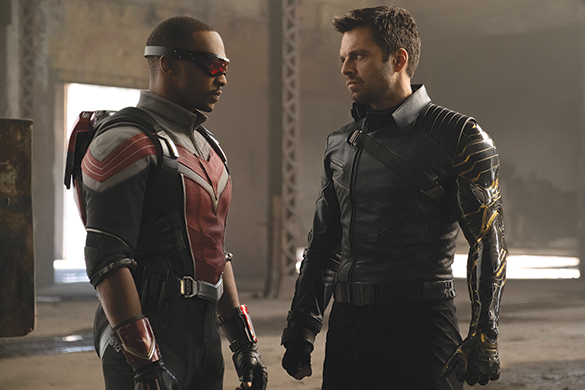 Sam and Bucky’s charismatic relationship makes “Falcon and the Winter Soldier” one of the best from the Marvel Cinematic Universe. (photo courtesy of Disney+)

Marvel can do no wrong. OK, that might overstate things a bit, but the film studio’s second foray into small-screen territory continues a 13-year streak of generating wildly entertaining media, now on multiple platforms. The first two episodes of “Falcon and the Winter Soldier” present a buddy superhero show exploding with action, occasional authentic moments and banter – oh so much banter.

Chris Evans’ Captain America captured the comics character brilliantly, but his definitive exodus in “Avengers: Endgame” created a vacancy. Who would now wield the shield, if anyone?

The man out of time chose Sam Wilson (Anthony Mackie) – or Falcon to the world – but that legacy immediately encountered a roadblock in the first episode of Marvel Studios’ next show premiering on Disney+, two weeks after “WandaVision’s” stunning outro.

Not long after the Avengers brought half the galaxy back into existence – including the man with his mechanical wings – Sam continues to fight as Falcon, now an army unto himself, sent on missions the military cannot. Things on the home front aren’t going as smoothly.

Avengers enjoy fame worldwide, but they don’t earn a paycheck for their service, and Sam’s sister Sarah (Adepero Oduye) struggled to maintain the family business in the five years dear brother blipped out of existence. Sadly, Sam’s name is only worth a selfie, not any support from the bank.

Elsewhere, Bucky continues to regain memories of his decades as a Hydra assassin, brainwashed to terminate any threats to the hidden organization. Two episodes in, the show title’s second-half serves as a haunting reminder of a past the former Cap sidekick can’t shake. Buck hopes to make amends, though he doesn’t care for mandated therapy with Dr. Raynor (Amy Aquino), whose insights hit a bit too close to home. 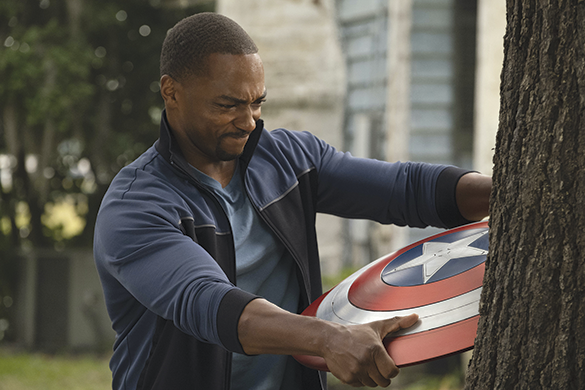 Sam holds the iconographic shield in “Falcon and the Winter Soldier.” (photo courtesy of Disney+)

Atop their personal problems, the U.S. military gives a soldier named John Walker (Wyatt Russell) a new superhero identity that angers Bucky and confuses Sam. His presence (without any spoilers here) prompts them both to ponder the legacy Captain America left behind.

That leads to one unique wink to the comics when Bucky introduces Sam to Isaiah Bradley (Carl Lumbly), who tarnishes the “wholesome” iconography of a hero sporting the American flag. (Again, no spoilers, but Isaiah’s 2003 debut in “Truth: Red, White and Black” is an incredible read.)

Both “WandaVision” and “Falcon and the Winter Soldier” highlight less featured superhero pairs. One is a more conventional romance, while this one provides the Marvel Cinematic Universe with its ultimate bromance. But it takes an episode to transpire. Everyone’s new favorite fanfic ship doesn’t share the screen until the second episode.

Their banter first peppered a few moments in “Captain America: Civil War,” but this series fully embraces the snark, Falcon antagonizing Bucky, who remains stoic to the end.

Everything about their dynamic resembles bickering lovers. The doc even forces them to lock eyes, comically close together, and speak from the heart. Of course, a staring contest ensues before anything revealing begins.

And during their inaugural clash with series antagonists, the Flash-Smashers, a global movement to undo every nation’s borders with a little help from a super-soldier serum, Sam swoops in to save Bucky. Their suggestive collision in an open field pays tribute to the greats, from “Jewel of the Nile’s” leading couple to Batman’s many crash landings underneath various love interests.

It all plays out wonderfully, setting up another four-hour-long episode in an espionage thriller that tonally channels “Captain America: The Winter Soldier.”

The action sequences are a work of art. Falcon’s few aerial sequences in previous films let the character show to a degree, but “Falcon and the Winter Soldier” jumps right in, featuring his best moves to date. Bucky hasn’t gotten his due yet, but it’ll certainly come, especially in a series whose villains all possess similar power as him, sans robotic arm.

The series also promises more familiar faces, like Baron Zemo (Daniel Brühl), a compelling villain from “Civil War” who needs more to do now that he proved he could turn heroes against each other with ease. And then there’s Sharon Carter (Emily VanCamp), formerly Agent 13 of S.H.I.E.L.D. and niece of Peggy Carter, Cap’s old flame (Cap kissed them both, and it’s super weird, especially given how “Endgame” concludes).

Unlike other Marvel fare, the joy of the Cap characters are the stunts and human element. Thor and Iron Man make for fun sci-fi and fantasy romps, but Cap’s whole world focuses on espionage and the thrills of hand-to-hand action sequences. Certainly powers amp up things a bit, but that human element, from banter to heroes who get out of breath, makes this series special.