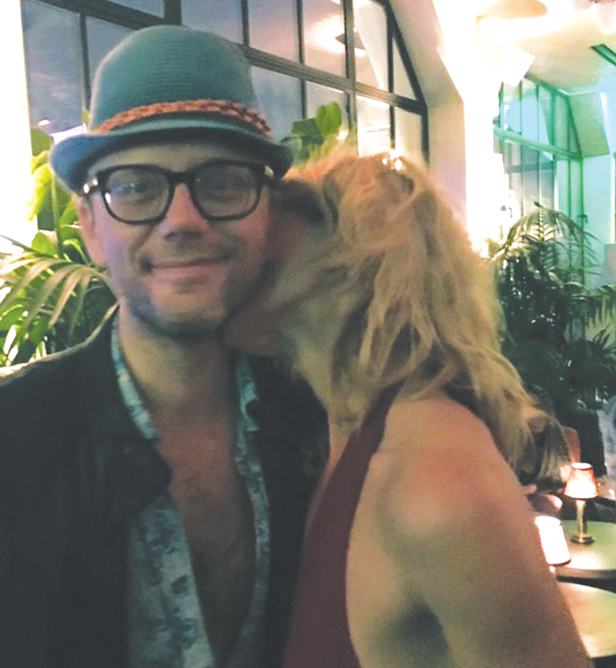 Valentin Broeksmit has been missing since April 6 after last being seen leaving the Griffith Park area. (photo courtesy of Marie Peter-Toltz)

The whereabouts of a 45-year-old man who was last seen after he dropped his girlfriend off on April 6 at a Griffith Park tennis facility remain a mystery. Police are continuing to track down leads in the disappearance and are asking for tips that may lead to Valentin Broeksmit, who goes by Val, according to his girlfriend, Marie Peter-Toltz.

Peter-Toltz said Broeksmit did not exhibit unusual behavior, show signs of wanting to harm himself or give any indication that he was planning to flee in the hours leading up to his disappearance. She said Broeksmit dropped her off at the tennis courts near Los Feliz Boulevard and Riverside Drive at approximately 4 p.m. and was supposed to return a couple hours later. She waited and worried when Broeksmit didn’t return as planned. Peter-Toltz said her phone died and she had to borrow one from someone at the tennis center to call her boyfriend, who never answered.

“I was very worried,” Peter-Toltz said. “He is a very reliable person. It is unlike him. I waited so long at the tennis club. I don’t know what happened to him.”

Peter-Toltz said she returned to the apartment they shared near downtown Los Angeles and wondered where Broeksmit was all night. In the morning, a tracker on her boyfriend’s cell phone alerted her that it was located in a neighborhood near the Santa Monica (10) Freeway on the southern outskirts of downtown L.A. She said she went to the location, a warehouse district near Central Avenue and 16h Street, and found the red 2020 Mini Cooper they shared abandoned with the phone inside. Peter-Toltz said she then called police.

Det. M Beall, with the Los Angeles Police Department’s Missing Person’s Unit, confirmed that was the same information Peter-Toltz told police about Broeksmit’s disappearance. The Mini Cooper was impounded and remains in police custody as evidence, she said. Investigators are not ruling anything out and are following all leads.

“We are getting calls on it. We are getting information from the public,” Beall said. “It’s an unusual case. We are trying to move forward but we are not getting anywhere.”

A point of interest in the case is Broeksmit’s connection to a previous federal investigation involving alleged improprieties at Deutsche Bank, which was detailed in a 2019 New York Times article and bestselling book, “Dark Towers,” by David Enrich. Broeksmit’s father, Deutsche Bank executive William Broeksmit, died by suicide in 2014, and the younger Broeksmit allegedly had access to documents and information about his father’s activities at the bank, according to the New York Times article.

The article contained details about Broeksmit meeting with FBI agents regarding their investigation into Deutsche Bank and described him as a whistle-blower. Without making a direct connection to any information provided by Broeksmit, the article states that $41 million in fines were assessed by the U.S. government in 2017 for Deutsche Bank’s alleged failure to follow anti-money-laundering laws.

The article also described Broeksmit’s alleged habitual drug abuse and eccentric behavior, including a penchant for trying to expose secrets and his musical skills in a band called Bikini Robot Army.

Beall acknowledged the 2019 New York Times article and said she spoke with FBI agents after Broeksmit was reported missing. They concluded it was unlikely that investigation had anything to do with Broeksmit’s disappearance on April 6, she added.

“We know about the article. Initially, we thought it might be something, but we are fairly confident now it’s not the case, that it has anything to do with the information he gave the FBI,” Beall said, citing the fact that years have passed since the FBI spoke with Broeksmit. “We can’t say with absolute certainty, but we don’t think it’s the case.”

Peter-Toltz said the information in the article was true regarding the FBI investigation but offered no specific details about what Broeksmit may have provided to government authorities or may still possess. She also denied Broeksmit was a substance abuser.

Peter-Toltz surmised that Broeksmit’s disappearance is somehow connected to a custody battle involving her son, but said she has no concrete evidence. She said she lost custody of her 9-year-old son to her ex-husband, and her relationship with Broeksmit was and remains a contentious part of the custody battle. She said Broeksmit spoke to a case worker from the Los Angeles County Department of Children and Family Services on the day he disappeared, and she thinks he may have been upset over prospects of her regaining custody of her son.

“We had my son with us full time until last year when I lost custody. Val tried to stop them. Since then, it’s been an ongoing battle,” Peter-Toltz said. “It’s not like Val to go missing. It’s not like him to say he is going to pick me up and he doesn’t. I just don’t know what happened to him.”

Anyone with information about Broeksmit’s whereabouts is urged to call the LAPD’s Missing Persons Unit at (213)996-1800. During weekends and off-hours, call the LAPD’s hotline at (877)LAPD247.

Police search for van driver who struck teen and fled