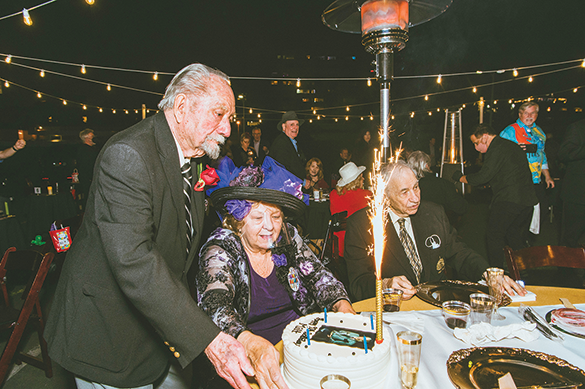 The event, which was held via Zoom, honored Larsen, who founded the Magic Castle in Hollywood in 1963 along with his brother, Bill Larsen Jr., and Bill’s wife, Irene. He was named in 2000 as one of the 100 most-influential individuals in the history of magic.

Milt Larsen’s career encompasses writing, producing and performing. As a writer, he is best known in the field of audience participation having written “Truth or Consequences” starring Bob Barker for an incredible run of eighteen years. In the songwriting field the team of Sherman and Larsen have a cult comedy following for their outrageous songs (for their time) that can be heard currently on CDs “Bon Voyage Titanic – Smash Flops” and “Banned Barbershop Ballads.” He has written many stage revues and musicals.

He and his writing partner Richard M. Sherman, who has won two Academy Awards and been nominated for 13 others, have written several musicals, which have enjoyed rave reviews.

As a producer, in addition to The Magic Castle and It’s Magic! Larsen owned and operated Mayfair Music Hall in Santa Monica and the Variety Arts Theater. He has produced TV specials for ABC, CBS and NBC. He was the creator and consultant for the $50 million Caesars Magic Empire at Caesars Palace in Las Vegas.

As a performer he is an active member of SAG and AFTRA and has been seen yanking tablecloths in films and commercials. He also created a weekly radio feature “Hear Them Again – for the first time,” featuring recordings from the first half of the 20th Century. The show is now heard on CRN the Digital Cable Network.

Milt Larsen divides his time between his offices in Hollywood, next to the Magic Castle, and his beautiful home on Santa Barbara’s mesa with his wife Arlene.